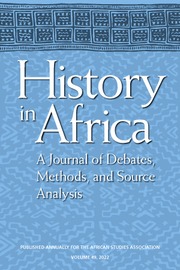 In the 1992 volume of History in Africa, John D. Fage asked readers for possible additions to his landmark 1987 Guide to Original Sources for Precolonial Western Africa Published in European Languages, as he was preparing a second edition. I responded with a list of suggested additions and corrections that I had been storing up. This started a fruitful correspondence that continued beyond the appearance of the second edition in 1994, in which he generously acknowledged my help. In my last letter I told him I was already keeping notes on my computer for a third edition of the Guide. On 2 October 1994 he replied that “[a]s things stand at the moment, I doubt whether I shall want to do a third edition. The effort required to try and keep abreast with the literature seems to be continually increasing! … But then I don't see why—in due course—you shouldn't blossom forth yourself as the author of an ‘Additions and Corrections to Fage's Guide’. Indeed, this might be the more proper course.”

One can imagine the effect this confidence expressed by a grand old man of African historiography had on the novice to the field that I was. For a dozen years (extending beyond Fage's death in 2002) I haphazardly gathered information suitable for a supplement to the second edition. I then approached David Henige about it, and he encouraged me to complete the project systematically. This took 18 more months.