Hegel and Aristotle on the Metaphysics of Mind 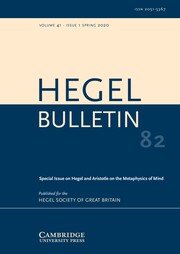