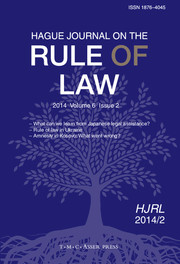 Shooting in the Dark: Evaluating Kosovo's Amnesty Law and the Role of International Actors

The Parliament of Kosovo passed a controversial amnesty law in July 2013 within the context of the Brussels-led negotiations between Serbia and Kosovo. This article evaluates the law using a functional framework, thus exploring possible implications with regard to legality, the rule of law, security, the economy, and reconciliation. We find that the amnesty law entails serious problems or risks in each aspect except legality due to its broad scope which includes common and economic crimes while providing possibilities for abuse. Moreover, internationals actors involved in the negotiation process exerted considerable pressure to adopt the amnesty law which raises questions concerning their motives and strategy. We argue that their uncritical attitude can be explained by a combination of four principal factors, including a strong focus on the realist exigencies of diplomacy, internal interests of the European External Action Service, a neglect of non-legal consequences of the law, and a general practice of exceptional and unaccountable policy-making in Kosovo. A functional assessment as offered in this article would have provided a more comprehensive understanding of the possible implications of the law, including the serious risks it poses to the fragile post-conflict situation in Kosovo.

Shooting in the Dark: Evaluating Kosovo's Amnesty Law and the Role of International Actors
×

Shooting in the Dark: Evaluating Kosovo's Amnesty Law and the Role of International Actors
×

Shooting in the Dark: Evaluating Kosovo's Amnesty Law and the Role of International Actors
×
×