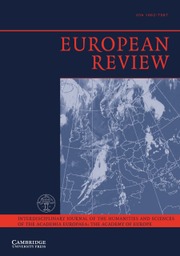 The European Review is a unique interdisciplinary international journal covering a wide range of subjects. It has a strong emphasis on Europe and on economics, history, social science, and general aspects of the sciences. At least two issues each year are devoted mainly or entirely to a single subject and deal in depth with a topic of contemporary importance in Europe; the other issues cover a wide range of subjects but may include a mini-review. Past issues dealt with Brexit and its Implications for European Integration, Brain Computer Interfaces for Silent Speech, Evolution as Physics: The Human & Machine Species, The Crisis in the Humanities and 'Invented Tradition', The Internationalisation of Higher Education, Can we tackle the Antibiotic Threat?, How Mathematics is rooted in Life, Japan; the First Quest of Modernization in East Asia, Academic Mobility and Migration, Maoism and Postmodernism, The Beijing 2008 Olympics, Climate Change Sceptics, Concept of Law in Chemistry; The Concept of Law and Models in Chemistry, Overcoming European Civil War