This is an Open Access article, distributed under the terms of the Creative Commons Attribution licence (http://creativecommons.org/licenses/by/4.0/), which permits unrestricted re-use, distribution, and reproduction in any medium, provided the original work is properly cited.
Copyright
© The Author(s) 2020

Following the approach recommended by the developers [Reference Bulik-Sullivan, Loh, Finucane, Ripke and Yang23,Reference Bulik-Sullivan, Finucane, Anttila, Gusev, Day and Consortium34] and previous study [Reference Bulik-Sullivan, Finucane, Anttila, Gusev, Day and Loh25], LDSC software (v1.0.0; https://github.com/bulik/ldsc) were applied to the GWAS summary data for evaluating the genetic correlations between each of the five psychiatric disorders and each of the 3,283 plasma proteins at first. Using the same method, the significant genetic correlations were further validated using the cross-disorder GWAS replication data. The basic principle of the LDSC approach is to estimate directly from GWAS summary data using the deviation of the observed χ 2 test statistic for a SNP from its expected value under the null hypothesis of no association [Reference Shi, Kichaev and Pasaniuc35]. An SNP tagging more of its neighbors—and, thus, having a higher LD score—is more likely to tag one or more causal sites affecting the phenotype [Reference Shi, Kichaev and Pasaniuc35]. If genetic correlations are statistically and quantitatively significant, then we can determine that total phenotypic correlations cannot be attributed to fully environmental confounders [Reference Lee and Chow24]. In addition, Anney et al. have demonstrated that LD score regression can distinguish genuine polygenicity from the bias caused by population stratification and cryptic relatedness [Reference Anney, Ripke, Anttila, Grove, Holmans and Huang28]. The European LD scores, calculated from the 1,000 Genomes by the developers, were used in this study [Reference Anney, Ripke, Anttila, Grove, Holmans and Huang28]. 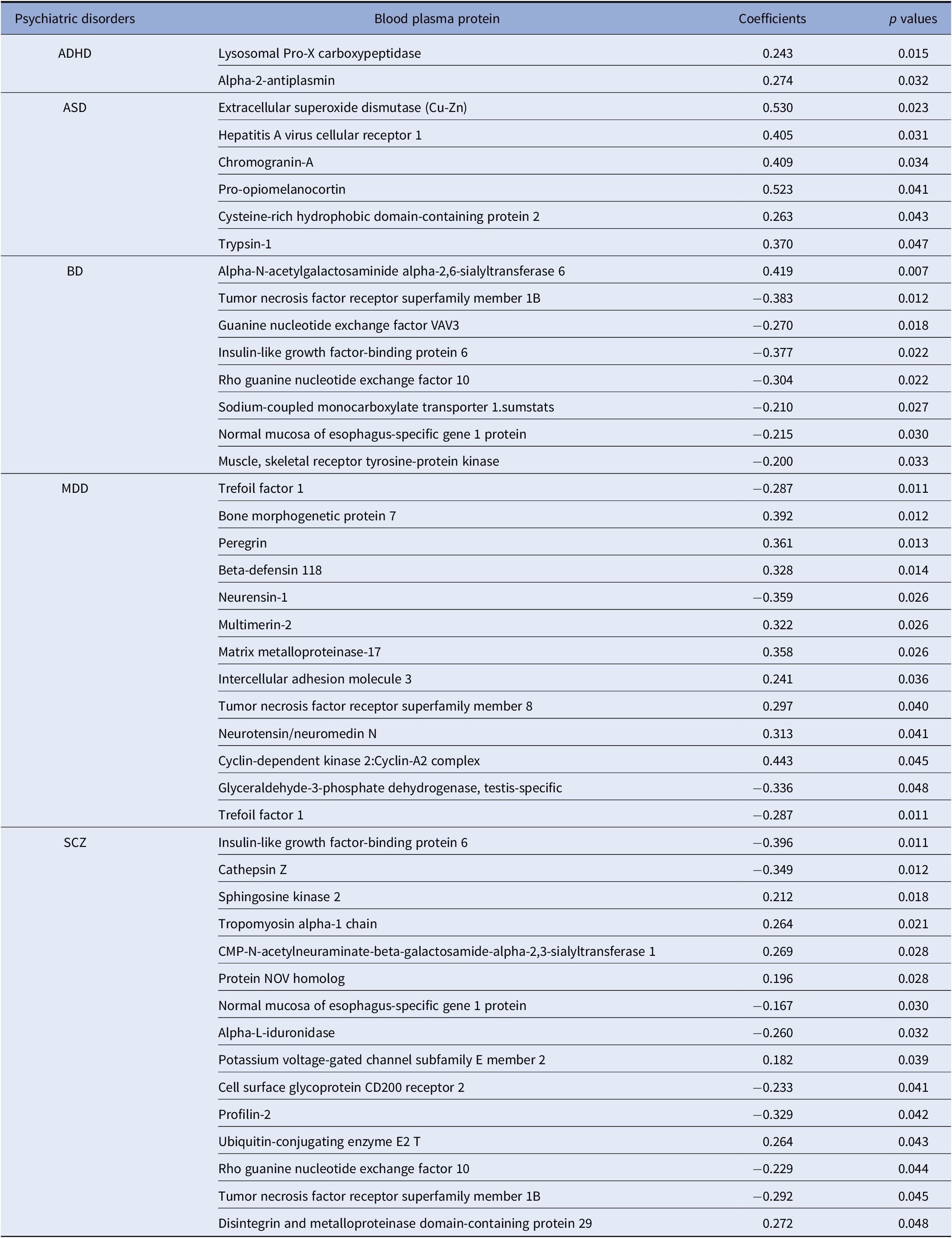 We found that POMC was correlated with autism, which was consistent with previous study [Reference Chamberlain and Herman36]. POMC is a precursor polypeptide with 241 amino acid residues, and cleave to give rise to multiple peptide hormones. Previous studies of adult individuals exhibiting self-injurious behavior suggested that the pro-opiomelanocortin system, especially the endogenous opioid system, was dysregulated in the subgroups of autistic patients [Reference Leboyer, Bouvard, Recasens, Philippe, Guilloudbataille and Bondoux37,Reference Sandman, Hetrick, Taylor and Chiczdemet38]. Cazzullo et al. have suggested that the concentration of plasma POMC fragments, especially opioid fragments, contributed to the symptoms of autism as well as the response to treatment [Reference Cazzullo, Musetti, Musetti, Bajo, Sacerdote and Panerai39]. A mutation in the opioid region of the POMC gene in an autistic individual indicated that a subgroup of patients will be identified who share a POMC genetic defect [Reference Sandman, Spence and Smith40,Reference Sandman, Touchette, Marion, Lenjavi and Chicz-Demet41].

The defects responsible for impaired sensorimotor gating in mice, a hallmark of SCZ, might include myelination dysregulation, which has been observed in some cases of human SCZ [Reference Braff, Grillon and Geyer45,Reference Hakak, Walker, Li, Wong, Davis and Buxbaum46]. Notably, sphingosine 1 phosphate (S1P) receptor expression in oligodendrocytes involves in the process of myelination in the rodent central nervous system and might contribute to glial differentiation, maturation, and myelination during development [Reference Kim, Miron, Dukala, Proia, Ludwin and Traka47]. Contos et al. suggested that constitutive knockout of S1P receptor 1 causes a behavioral phenotype reminiscent of SCZ [Reference Contos, Ishii, Fukushima, Kingsbury, Ye and Kawamura48]. The concentration of S1P is regulated by the activities of two kinases—sphingosine kinase 1 and 2, a number of broad specificity lipid phosphate phosphatases which have a selectivity toward S1P [Reference Maceyka, Harikumar, Milstien and Spiegel49]. In this study, we found that sphingosine kinase 2 was correlated with SCZ, which is consistent with previous conclusions.

Additionally, we observed genetic correlation evidence between guanine nucleotide exchange factor 3 VAV3 (VAV3) and BD. A study including 199 participants from the Mayo Clinic Bipolar Disorder Biobank suggested that several SNPs of VAV3 gene was associated with the response to antiepileptic drugs-mood stabilizers in BD patients [Reference Ho, Nassan, Balwinder, Colby, McElroy and Frye50]. Previous molecular biological studies have found multiple shared risk components between BD and SCZ [Reference Lichtenstein, Yip, Björk, Pawitan, Cannon and Sullivan5,Reference Smoller, Kendler, Craddock, Lee, Neale and Nurnberger7]. It is interesting that we found common proteins shown significant genetic correlations between BD and SCZ in this study, for instance tumor necrosis factor receptor superfamily member 1B (TNFRSF1B). TNFRSF1B, also known as tumor necrosis factor receptor 2 (TNFR2), is a membrane receptor that binds tumor necrosis factor-alpha. TNFRSF1B is expressed in glia and neurons [Reference Mitsuhiro, Annie-Claire, Isabelle and Nicolas de51]. It has been reported that TNFRSF1B mediated trophic or protective role in neuronal survival [Reference Fontaine, Mohandsaid, Hanoteau, Fuchs, Pfizenmaier and Eisel52]. TNFRSF1B knockout studies in mice suggested a role of TNFRSF1B in protecting neurons from apoptosis by stimulating antioxidative pathways [Reference Bruce, Boling, Kindy, Peschon, Kraemer and Carpenter53]. Till et al. suggested that the polymorphism of TNFRSF1B gene resulted in a lower capability to induce NF-kB activation, leading to an enhancement of TNFR1-induced apoptosis [Reference Till, Rosenstiel, Krippnerheidenreich, Mascheretticroucher, Croucher and Schafer54]. SCZ patients with 676G allele of TNFRSF1B have a decreased neuron survival, dendritic branching, and capacity of remyelination [Reference Thabet, Ben Nejma, Zaafrane, Gaha, Ben Salem and Romdhane55]. Compared with healthy control subjects, SCZ and BD patients have higher plasma soluble TNFRSF1B levels [Reference Hoseth, Ueland, Dieset, Birnbaum, Shin and Kleinman56]. This could be interpreted as the increasing in soluble TNFRSF1B levels to reduce apoptosis and modulate TNF activity in the euthymic period in BD [Reference Doganavsargil-Baysal, Cinemre, Aksoy, Akbas, Metin and Fettahoglu57]. Based on the previous and our study results, it is reasonable to infer that the observed negative genetic correlations between TNFRSF1B and BD/SCZ may partially be explained by the protective effects of TNFRSF1B on neurons. Further studies are needed to confirm the role of TNFRSF1B in the pathological mechanisms of BD and SCZ.

This study is supported by the National Natural Scientific Foundation of China (81472925, 81673112), the Key Projects of International Cooperation Among Governments in Scientific and Technological Innovation (2016YFE0119100), the Natural Science Basic Research Plan in Shaanxi Province of China (2017JZ024), and the Fundamental Research Funds for the Central Universities.

The authors have stated that they have no conflict of interest.

S.C. and F.Z. conceived and designed the study, wrote the manuscript, collected the data, and carried out the statistical analyses; F.G., M.M., L.Z., B.C., X.Q., C.L., P.L., O.P.K., and Y.W. made preparations for the manuscript at first. All authors reviewed and approved the final manuscript.

Shiqiang Cheng and Fanglin Guan contributed equally to this work. 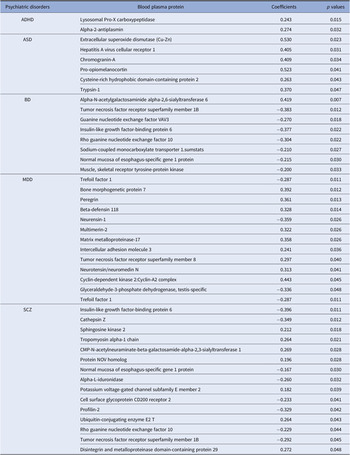