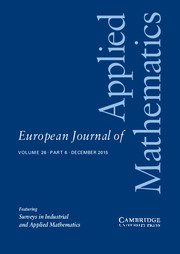 This paper is devoted to the study of the asymptotic behaviour of the high-frequency spectrum of the wave equation with periodic coefficients in a ‘thin’ elastic strip Ση=(0, 1)×(−η/2, η/2), η > 0. The main geometric assumption is that the structure period is of the order of magnitude of the strip thickness η and is chosen in such a way that η−1 is a positive large integer. On the boundary ∂Ση, we set Dirichlet (clamped) or Neumann (traction-free) boundary conditions. Aiming to describe sequences of eigenvalues of order η−2 in the above problem, which correspond to oscillations of high frequencies of order η−1, we study an appropriately rescaled limit of the spectrum. Using a suitable notion of two-scale convergence for bounded operators acting on two-scale spaces, we show that the limiting spectrum consists of two parts: the Bloch (or band) spectrum and the ‘boundary’ spectrum. The latter corresponds to sequences of eigenvectors concentrating on the vertical boundaries of Ση, and is characterised by a problem set in a semi-infinite periodic strip with either clamped or stress-free boundary conditions. Based on the observation that some of the related eigenvalues can be found by solving an appropriate periodic-cell problem, we use modal methods to investigate finite-thickness semi-infinite waveguides. We compare our results with those for finite-thickness infinite waveguides given in Adams et al. (Proc. R. Soc. Lond. A, vol. 464, 2008, pp. 2669–2692). We also study infinite-thickness semi-infinite waveguides in order to gain insight into the finite-height analogue. We develop an asymptotic algorithm making use of the unimodular property of the modal method to demonstrate that in the weak contrast limit, and when wavenumber across the guide is fixed, there is at most one surface wave per gap in the spectrum. Using the monomode property of the waveguide we can consider the gap structure for the nth mode, when doing so, for traction-free boundaries, we find exactly one surface wave in each n-band gap.