What Works for Whom? Genetic Moderation of Intervention Efficacy 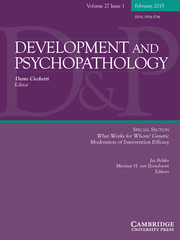