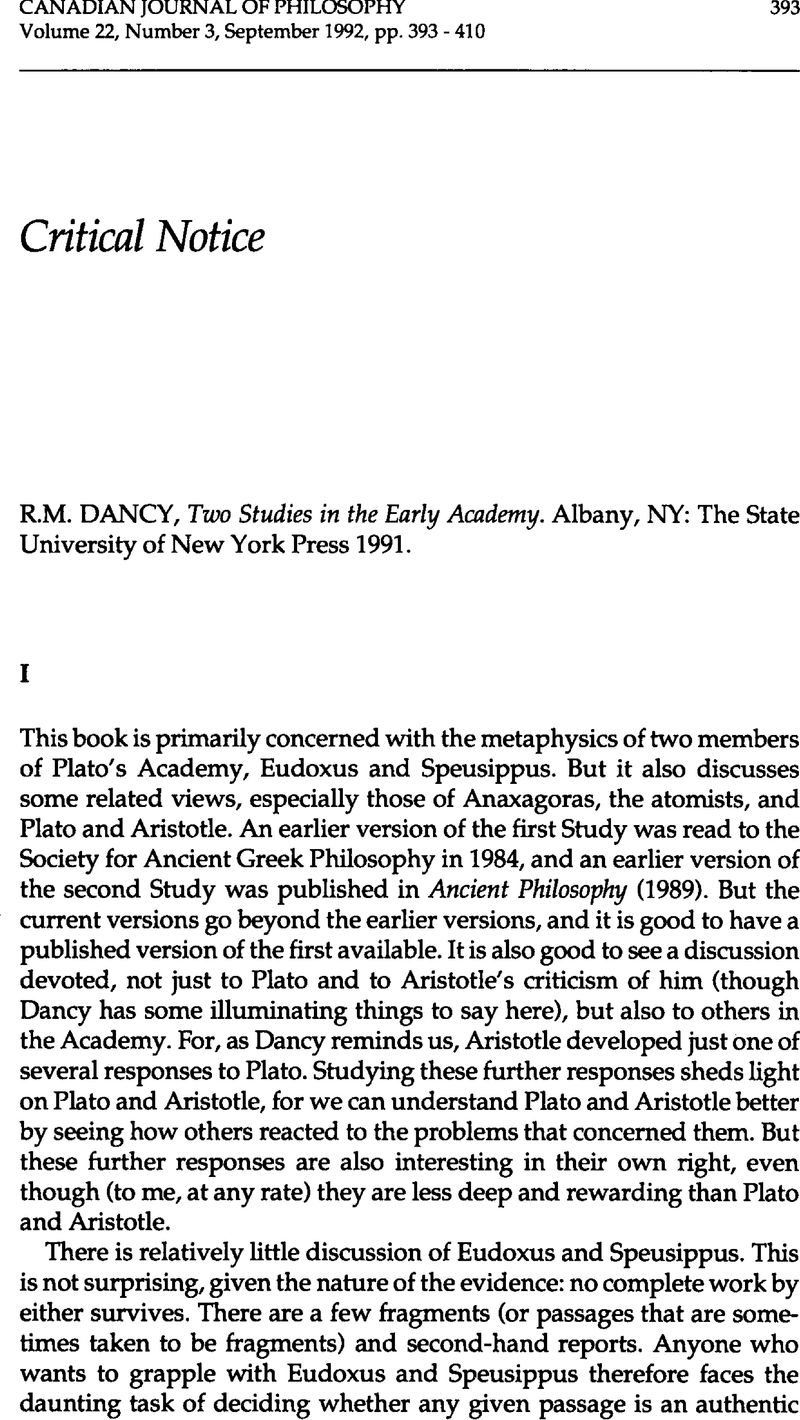 1 Dancy denies, however, that Aristotle's view of essential predication is immanentist, since 'in the Categories nothing explains' Socrates' being a man (4). However, Aristotle says that secondary substances reveal (dêloi, 2b31) what primary substances are; they answer the 'What is F?' question about them (2b7-14). So this man's being a man is explained by the fact that man, a species, is said of him. This might not be immanentism, since man is said of rather than in this man; but, contrary to Dancy, something does explain this man's being a man. (Nor should Dancy explicate in-predications in terms of accidental predications, since some inherent properties are necessary.)

2 Similarly, Dancy cites various passages that are sometimes taken as evidence of immanentism; but, he says, 'we cannot count all of these' (10). I agree. But can we count some of them? Dancy's answer is again elusive.

4 Dancy claims, however, that in this particular case we should not differentiate between the Symposium and Phaedo (129-30, n. 67). Unfortunately, he does not say why, though he promises a fuller discussion in a forthcoming book.

5 There is a textual dispute as to which of these (or yet further) readings should be favored. All the manuscripts have prosgenomenê; prosagoreuomenê is a conjecture by Wyttenbach. Dancy believes that the textual dispute 'makes little difference to the general sense' of the passage (129, n. 61).

6 Dancy might argue that the language of 'in' in the clever aitia is metaphorical where G is a form but literal elsewhere (as in the fever example). But this seems ad hoc, nor does he explicitly argue in this way. He simply notes that the intermediate entity is sometimes a form, without asking what this can mean given his earlier claim that forms are not literally in things, although intermediates are literally in things.

9 At least, this is the verdict defended on p. 53. But on p. 42, Dancy says that he 'sees no way of choosing' between the view that Objection (4) is from the Peri Ideôn, on the one hand, and due to Alexander, on the other. Yet there is no intervening argument in support of the stronger conclusion (that the argument is not due to Alexander) advocated on p. 53. Or again, on p. 44 Dancy says that 'there is no particularly good reason' to ascribe objection (2) to the Peri Ideôn or, indeed, to Aristotle elsewhere. But by p. 53 it has been excluded from the Peri Ideôn, with no further reasons for doing so. I shall write as though Dancy consistently favors the stronger claim.

10 In this connection, it is worth noting that Dancy seems to agree with most scholars that elsewhere in his commentary Alexander is 'quoting from ... or paraphrasing' the Peri Ideôn (102). Indeed, he thinks that the account of the Third Man Argument provided by Alexander is 'probably very nearly Aristotle's words' (102). I am not sure why he believes this, when he is so critical of Alexander's reliability in his account of the criticisms of Eudoxus. Certainly the account of the Third Man provided in the Peri Ideôn is quite different from any account Aristotle offers elsewhere, so it is not as though we have an independent check. Yet elsewhere the absence of an independent clleck seems to cause Dancy to refrain from ascribing an argument to Aristotle.

11 On p. 44, Dancy uses the fact that the requirement on mixture is not prominent in Aristotle but is prominent in Alexander to justify only the more moderate conclusion that there is no good reason to ascribe (2) to Aristotle. I don't think the evidence adduced justifies even this more moderate conclusion. But by p. 53 Dancy seems to think it justifies the even stronger conclusion that (2) is not due to Aristotle; at least, there is no intervening argument in support of the stronger conclusion to which p. 53 is committed; see n. 9.

12 Cited above in section I.

13 I discuss the dispute below.

15 Dancy says that he would be 'sympathetic' to the strategy of construing the 'is' in the atomists' claims elliptically, but he does not consider the precise form of this strategy that I am suggesting, and he remarks that 'no one has worked it out for Leucippus and Democritus. And I do not think it conflicts with the claims I make here' (148, n. 27). But on my version of the strategy it does conflict with Dancy's claims, since on Dancy's view but not on mine the atomists are Meinongians. Dancy says that 'there is a temptation to squirm out of [the seeming contradiction] by ... [introducing] different senses of "to be"' (68). But he dismisses this strategy by saying that 'nothing in our passage suggests that Leucippus was drawing such a distinction,' though he takes it to be 'clear' that Leucippus is a Meinongian.

17 Dancy also argues that the Stoics are Meinongians (72-6). However, he curiously does not discuss Plotinus, though he is often taken to be a Meinongian.

18 Dancy also relies heavily on a passage from the fourth chapter of Iamblichus' De Communi Mathematica Scientia (DCMS). (Dancy calls this work On Universal Mathematical Science, which he abbreviates to Universal Math.) It is disputed whether this work is Speusippean. For the view that it is not, see L. Tarán, Speusippus of Athens: A Critical Study with a Collection of the Related Texts and a Commentary (Leiden: E.J. Brill1981), 107. Dancy, however, follows Philip Merlan (who, in tum, has recently been defended by John Dillon) in favoring the view that it is. For Merlan's defense of its Speusippean credentials, see P. Merlan, From Platonism to Neoplatonism, 2nd ed. (The Hague: Martinus Nijhoff 1960), ch. 5. For Dillon's defense, see J. Dillon, 'Speusippus in Iamblichus,' Phronesis 29 (1984), 325-32. While not wanting to dispute the view that the passage is Speusippean, I will just say that I find it odd that Dancy is so willing to rely on it, given his treatment of Alexander. To be sure, we saw above that Dancy gives reasons for doubting that Alexander is relying on the Peri Ideôn. He also gives reasons for relying on Speusippus. But I argued that his reasons for doubting Alexander are open to question; and his defense of Speusippus is far briefer and more cursory than is his indictment of Alexander. Yet one would have thought that any defense of the Iamblichus passage required considerable argument, especially from someone who, like Dancy, is so skeptical about Alexander. For Iamblichus is a much later and generally less reliable source than Alexander; moreover, he doesn't even mention Speusippus, whereas Alexander mentions the Peri Ideôn, and seems, even to Dancy, to be pretty accurate in much of his account of the Peri Ideôn. Here, then, is another example of the ambivalence Dancy seems to display to speculation as between the first and second Studies.

20 Though the passage does not explicitly mention Speusippus, it is generally thought to be about him.

21 I am not sure the argument does assume that 'being' is a kind term, but I shall pass that by.

23 Indeed, I don't think that any of the passages that are plausibly taken to ascribe to Speusippus the view that the One is not a being clearly to commit him to Meinongianism; they are all equally well taken; indeed, I am inclined to think, they are better taken, as saying only that the One is not a genuine being. 5o I am not convinced that Speusippus was a Meinongian. But I shall not pursue this theme much further here.

24 The second part of the Parmenides is also sometimes thought to have influenced Speusippus, but Dancy says surprisingly little about it. At one point (97), Dancy appeals to DCMS as evidence that Speusippus used an 'argument from simplicity.' He says that 'we hardly needed' DCMS to extract the argument, since 'it was frequently used by the Neoplatonists, who derived it from Plato's Parmenides,' and he then gives a brief description of the Parmenides' version of the argument; but he spends more time on DCMS than on the Parmenides.

26 Though it's worth noting that it is a self-conscious bit of speculation of the sort Dancy sometimes but not always eschews.

27 For an excellent discussion of this matter, see Marc Cohen, S. 'The Logic of the Third Man,' Philosophical Review 80 (1971), 448-75.CrossRefGoogle Scholar

28 At one point, Dancy says that 'nothing in the argument requires anything to be predicated of itself (169, n. 202). But compare that with the passage cited in the text from p. 103t.

29 This is both because it is quite cryptic, and also because of its penchant for punning (e.g., 'Alexander's list will not silence Karpping critics' [35]), which I found both wearing and obfuscating. But tastes vary here; Josiah Gould says that what he finds 'most commendable about this work is its fresh, crisp, lucid language' (cited on the back cover of Dancy's book).