Herpes simplex virus type 2 (HSV2) is a member of the alpha Herpesviridae subfamily associated with various central nervous system (CNS) manifestations.Reference Berger and Houff1 Variable clinical presentations, delay in diagnosis, and ongoing structural changes in the brain posttreatment can contribute to the morbidity and mortality of HSV encephalitis. We report a case of HSV2 encephalitis with multifocal brain hemorrhage, associated vasogenic edema, and discrete lesions masquerading as a metastatic process.

A 36-year-old healthy immunocompetent male developed new intermittent frontal headaches aggravated with postural changes. This was associated with nausea and vomiting and in the context of 30-pound weight loss over 3 months.

Over the next 2 months, the patient deteriorated and was readmitted to the community hospital after acute onset right facial droop. An initial CT head showed three hemorrhagic foci in the inferior posterior left frontal lobe, left subinsular region, and left temporal lobe, with associated vasogenic edema and midline shift. A repeat CT head showed expansion of the intraparenchymal hematomas with worsening midline shift and subfalcine herniation. As such, the patient was urgently transferred to our hospital for a decompressive craniectomy. 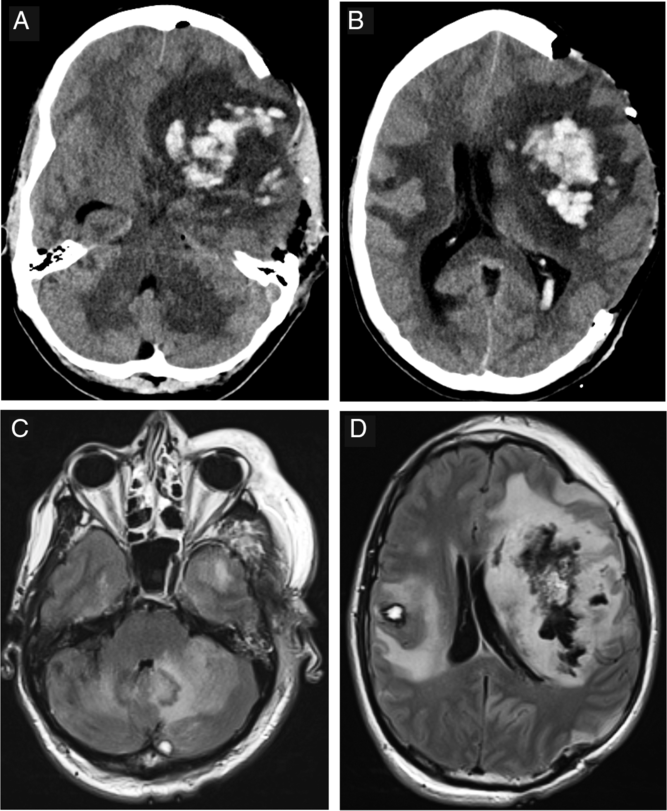 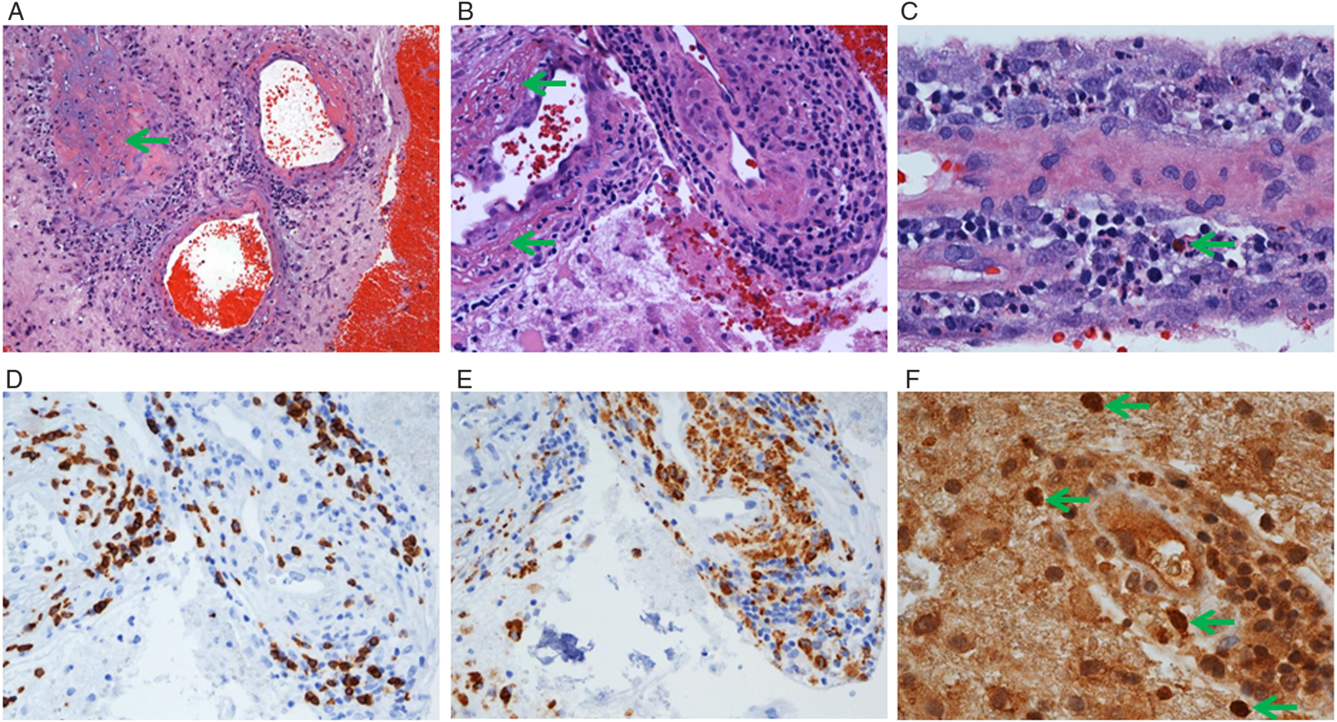 The patient was treated with acyclovir with addition of steroids and hypertonic saline for worsening edema and increased intracranial pressure. Due to ongoing ventilator dependency and unchanged clinical status, care was withdrawn and the patient died.

To our knowledge, this is the first case of HSV2 giving rise to multifocal hemorrhages with prominent edema and discrete lesions masquerading as a metastatic process. Previous case reports have detailed single and/or multifocal ischemic infarctsReference Guerrero, Dababneh, Hedna, Johnson, Peters and Waters2–Reference Zis, Stritsou, Panagiotis and Tavernarakis4 and multifocal ischemic infarcts with a single intracerebral hematoma,Reference Gaye and Grimaud5–Reference Zepper, Wunderlich, Forschler, Nadas, Hemmer and Sellner7 thought to be secondary to HSV2-induced vasculopathy.

Despite the overarching symptom of headache, CSF studies were not pursued on prior admissions, as an infectious process was not suspected due to the lack of systemic infectious signs. Moreover, the focus was on the presence of the intraparenchymal hemorrhages, which were thought to be hypertensive related. Although HSV2 generally gives rise to meningitis in an immunocompetent individual, the meninges are not the only component of the CNS that can be infected with HSV2, therefore contributing to the atypical clinical presentations of HSV2.Reference Berger and Houff1,Reference Zepper, Wunderlich, Forschler, Nadas, Hemmer and Sellner7 In the clinical case outlined above, HSV2 involvement would likely not have been detected without the significant clinical deterioration warranting neurosurgical intervention, which allowed for a tissue biopsy.

As outlined above, the pathological report on the tissue specimen revealed marked inflammation of blood vessels exhibiting transmural infiltration of inflammatory cells with prominent vessel wall destruction and fibrinoid necrosis consistent with necrotizing vasculitis. As such, causes of necrotizing vasculitis that manifest with intracranial hemorrhage were sought and ultimately led to positive immunohistochemical staining for HSV2.

Although it is tempting to speculate that a patchy meningitic process may have created multifocal areas of disruption to the neurovasculature unit, which, in turn, caused discrete areas of inflammation affecting nearby cerebral blood vessels, leading to vasogenic edema, inflammatory vascular remodeling, brain parenchyma inflammation, and ultimately hemorrhage and tissue necrosis, this would not explain why cerebral HSV2 infections do not give rise to a greater incidence of cerebrovascular complications. Indeed, a better understanding of the pathophysiology of the cerebrovascular complications from HSV2 involvement is warranted to explain how intracranial hemorrhage can ensue.

Unfortunately, both the delay in diagnosis and therapy ultimately contributed to the poor outcome in the patient, as HSV infections of the central nervous system require prompt treatment with acyclovir to reduce mortality. However, in the context of multifocal intracerebral hemorrhage, HSV involvement is rarely a consideration.

The authors have no conflicts of interest or disclosures to report. 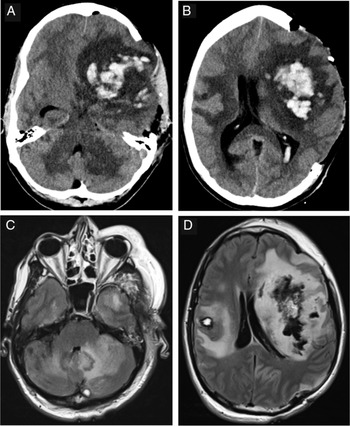 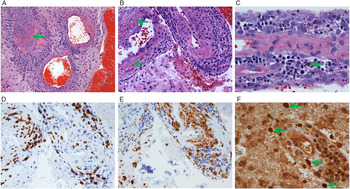