The connection between epilepsy and sleep is well recognized with the propensity of seizures differing between sleep–wake stages. A recent systematic review demonstrated that only 1% of seizures occur in rapid eye movement (REM) sleep as opposed to other stages in the sleep–wake cycle.Reference Ng and Pavlova1 It is hypothesized that widespread desynchronized low voltage fast electroencephalography (EEG) activity impairs epileptiform discharges and seizures, in contrast to the more synchronized and higher voltage activity of slow-wave sleep.Reference Ng and Pavlova1

N-methyl-D-aspartate receptor (NMDAR) encephalitis is an autoimmune encephalitis where autoantibodies attack extracellular cell surface or synaptic proteins.Reference Dalmau, Lancaster and Martinez-Hernandez2 In NMDAR encephalitis, antibodies attach to the NMDAR leading to immune activation with subsequent clinical symptoms: neuropsychiatric symptoms, impaired consciousness, seizures, autonomic instability, and hypoventilation.Reference Schmitt, Pargeon and Frechette3 Along with clinical symptoms, there are EEG changes associated with NMDAR encephalitis, such as the extreme delta brush (EDB) pattern, whose name is derived from the neonatal EEG delta brush pattern.Reference Dalmau, Lancaster and Martinez-Hernandez2 Schmitt et al. originally reported EDB as a marker of severe NMDAR encephalitis.Reference Schmitt, Pargeon and Frechette3 The pattern is comprised of slow rhythmic delta waves, 1–3 Hz, with superimposed fast beta activity, 20–30 Hz, appearing in approximately 50% of patients with NMDAR encephalitis.Reference Titulaer, McCracken and Gabilondo4 EDB becomes useful as it is easily recognizable on EEG, when obtained on patients presenting with symptoms suspicious for NMDAR encephalitis. This can improve diagnostic efficiency and reduce time to appropriate treatment. Currently, there is no consensus on the exact nature of EDB aside from being a biomarker of disease severity. This report raises the question of whether EDB should be considered (1) ictal and treated aggressively, (2) a purely non-ictal biomarker of disease, or (3) whether it lies somewhere within the interictal–ictal continuum.

A healthy 32-year-old female developed acute fluctuating level of consciousness over one day with episodic impulsivity, disorientation, and emotional outbursts of laughing and crying. She had a 3-day prior history of headache but was otherwise well. She presented to a peripheral hospital with a fever of 37.8 °C and was started on ceftriaxone, vancomycin, and acyclovir for suspected menigoencephalitis. Initial cerebrospinal fluid (CSF) showed an elevated total nuclear cell count of 182, lymphocytic pleocytosis, normal protein, and normal glucose with no polymorphonuclear cells or bacteria. She was transitioned to acyclovir only for presumed herpes simplex virus (HSV) encephalitis. She was transferred to our institution, as her clinical course worsened and she developed oral dyskinesias and lip smacking. Magnetic resonance imaging revealed T2 hyperintensities with cortical thickening of the right lateral temporal and parietal lobes (Figure 1A). EEG revealed two right frontotemporal seizures with clinical left-sided rhythmic jerking and secondary electrographic generalization over the course of 20 min (Figure 1B). EEG also revealed EDB (Figure 2) and a retained ability to enter REM sleep during which there was absence of both seizures and EDB. After HSV polymerase chain reaction testing returned negative, repeat CSF was sent for autoimmune antibody testing. She developed non-convulsive status epilepticus (NCSE), requiring intensive care despite treatment with phenytoin and levetiracetam. Given EDB and the clinical presentation, immunotherapy was started 2 weeks from her initial presentation. After failing 5 days of intravenous corticosteroids (1 g per day) and 5 days of intravenous immunoglobulin (0.4 g/kg per day), rituximab was started first and then adjunctive cycles of cyclophosphamide were introduced. 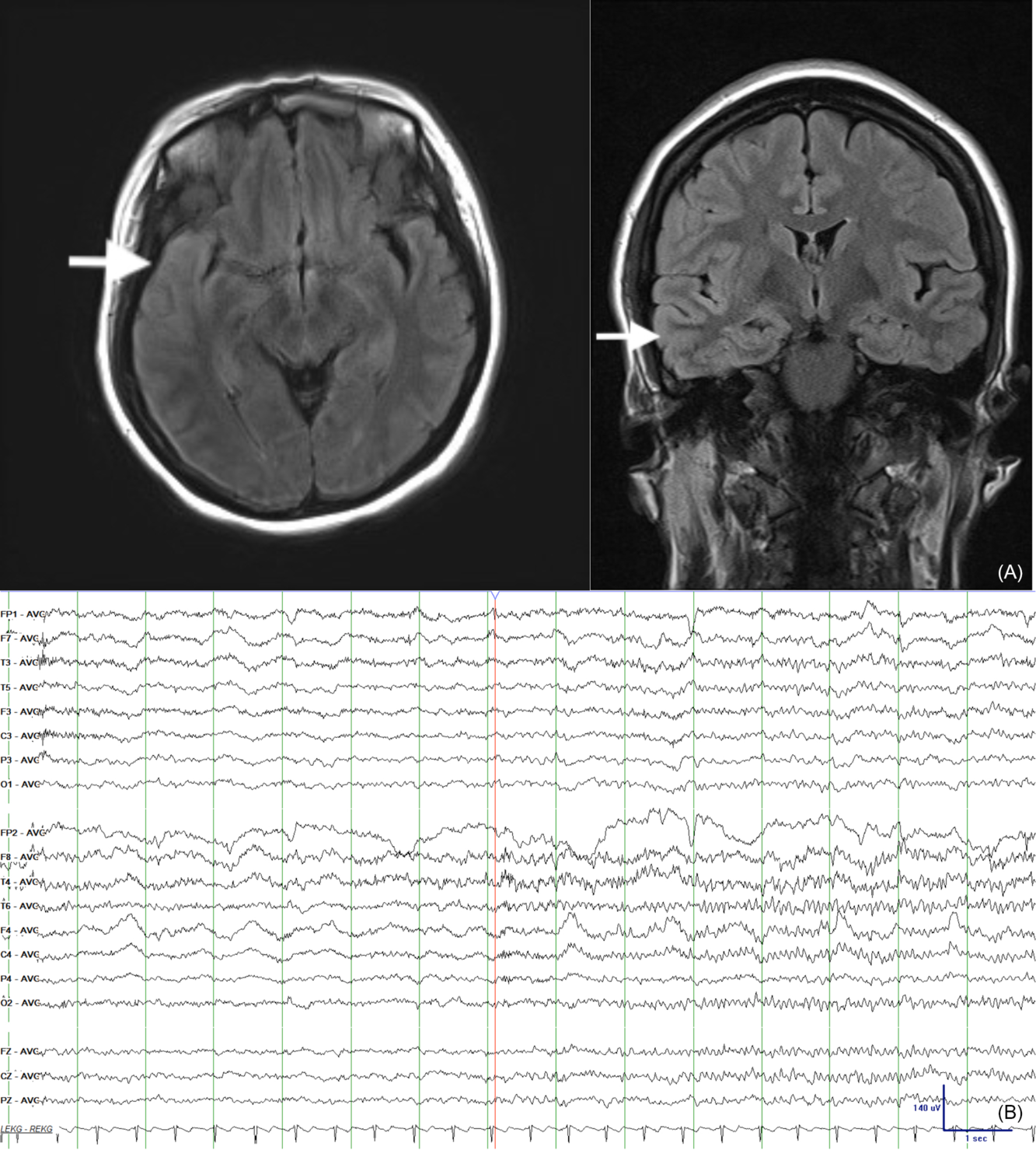 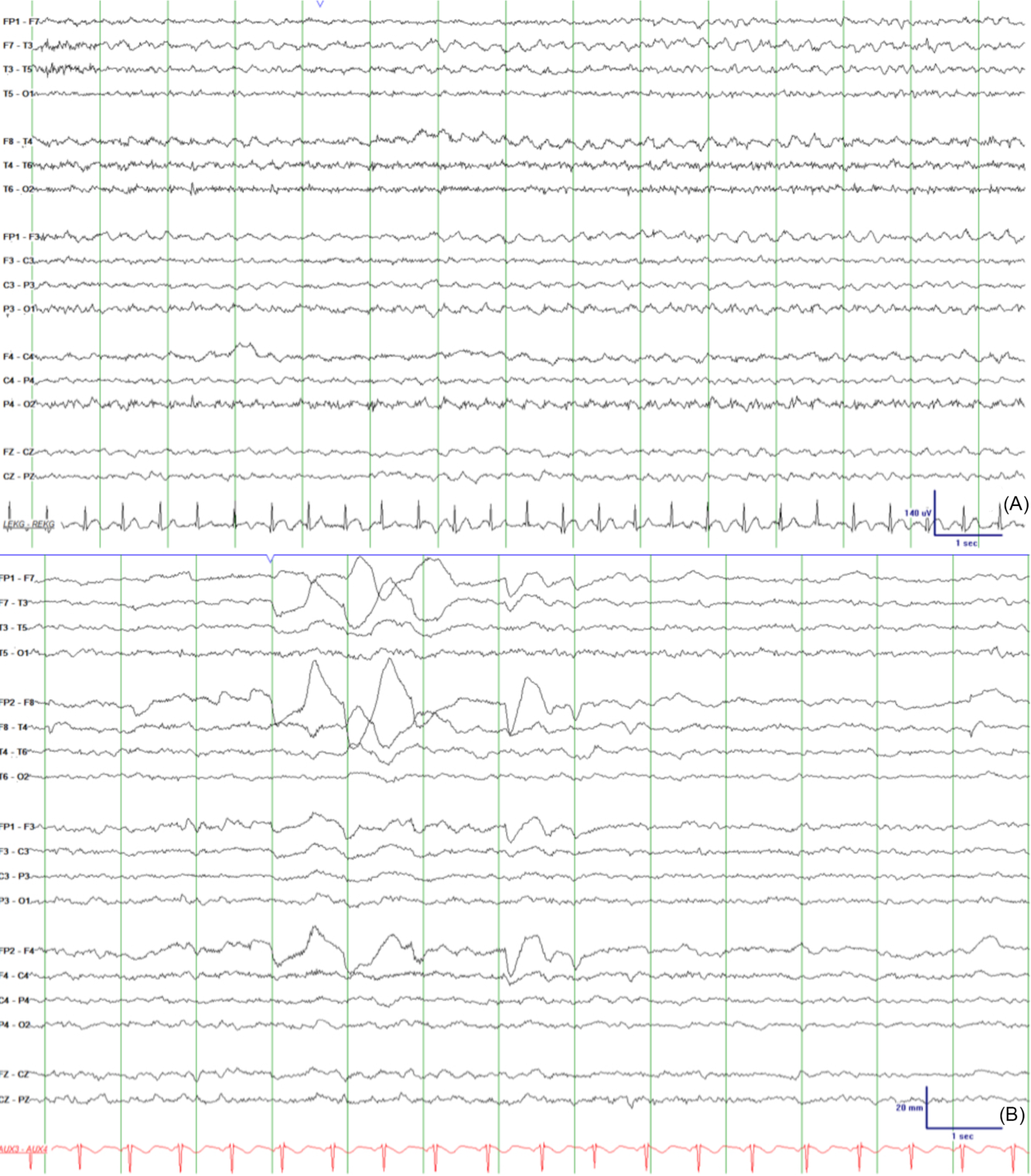 Figure 2: (A) Interictal generalized rhythmic delta activity and admixed fast activity with overall morphology reminiscent of an EDB pattern. (B) REM sleep with the absence of ictal patterns and EDB. EEG acquisition through a routine 20-min video-EEG recording in an epilepsy laboratory.

Eventually, highly positive NMDAR antibody titres were reported from CSF. Computerized tomography and positron emission tomography scans of the chest, abdomen, and pelvis were negative for any masses, teratomas, and non-teratomatous malignancy. Ten weeks later, she became seizure-free and was transferred to inpatient psychiatry for improved neuropsychiatric symptoms. Approximately 9 months after initial admission and multiple cycles of ritixumab and cyclophosphamide, she was discharged in stable condition.

We describe a novel case of NMDAR encephalitis in which the patient entered REM sleep with the absence of both ictal patterns and EDB. The presence of EDB on EEG, which is associated with NMDAR encephalitis, reflected the course of our patient because EDB was observed on EEG recordings prior to her eventually developing NCSE and requiring brief admission to the intensive care.Reference Dalmau, Lancaster and Martinez-Hernandez2,Reference Schmitt, Pargeon and Frechette3 Immunotherapy was started early due to suspicion of an autoimmune process despite the absence of confirmatory NMDAR titres at that time. The dosing of her immunotherapy was based partly on the treatment guidelines from Titulaer et al.Reference Titulaer, McCracken and Gabilondo4

There is debate around whether EDB is a pattern that is ictal, non-ictal, or on the interictal–ictal continuum.Reference Veciana, Becerra and Fossas5 Let us consider literature in favor of EDB being ictal. In Vecianea et al., 60% (9/15) of patients with NMDAR encephalitis had seizures on EEG and 33% (5/15) had status epilepticus. 33% (5/15) also had EDB and 100% of the patients (5/5) with EDB had status epilepticus on EEG and clinical seizures prior to EDB. Even though EDB may not be present in the beginning of disease, it can follow a pattern of electrographic seizures or be mixed with them. Taken together these data suggest a strong association between EDB and seizures such that EDB could possibly be a form of ictal patterns.

Next, let us consider literature that supports EDB as non-ictal. Chanson et al. suggest that EDB is not ictal because NCSE may be overestimated and its diagnosis is difficult without video-EEG and further invasive testing.Reference Chanson, Bicilli and Lauxerois6 In their report, intracranial monitoring did not observe increased intracranial pressure during EDB or generalized rhythmic delta activity patterns as opposed to ictal patterns in NCSE.Reference Vespa, Miller and McArthur7

However, EDB may also be somewhere on the ictal–interictal continuum, as Herlopian et al. report a case of NMDAR encephalitis where seizures and status epilepticus evolved from the high-frequency activity of EDB.Reference Herlopian, Rosenthal and Chu8 In their patient, seizures were controlled with multiple antiseizure drugs, but EDB persisted on EEG despite ongoing epileptic therapy and immunotherapy.

DJ was responsible for synthesizing the literature review and creating the case report. MCN helped guide, review, and supervise the entire case report from the beginning to the end and also helped with image acquisition.

The author would like to thank Dr. Marcus Ng for his excellent guidance during the entire process of producing this article. 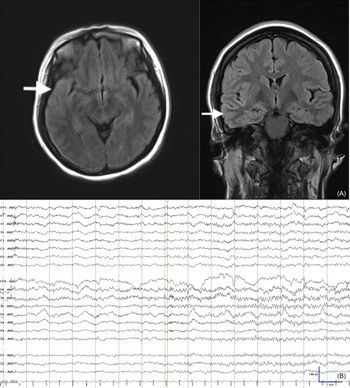 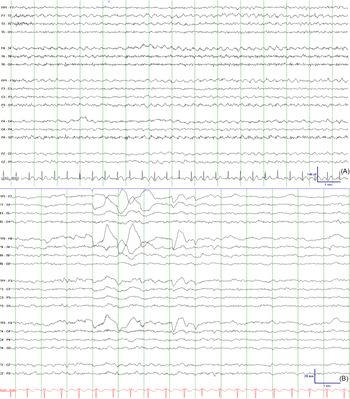 Figure 2: (A) Interictal generalized rhythmic delta activity and admixed fast activity with overall morphology reminiscent of an EDB pattern. (B) REM sleep with the absence of ictal patterns and EDB. EEG acquisition through a routine 20-min video-EEG recording in an epilepsy laboratory.