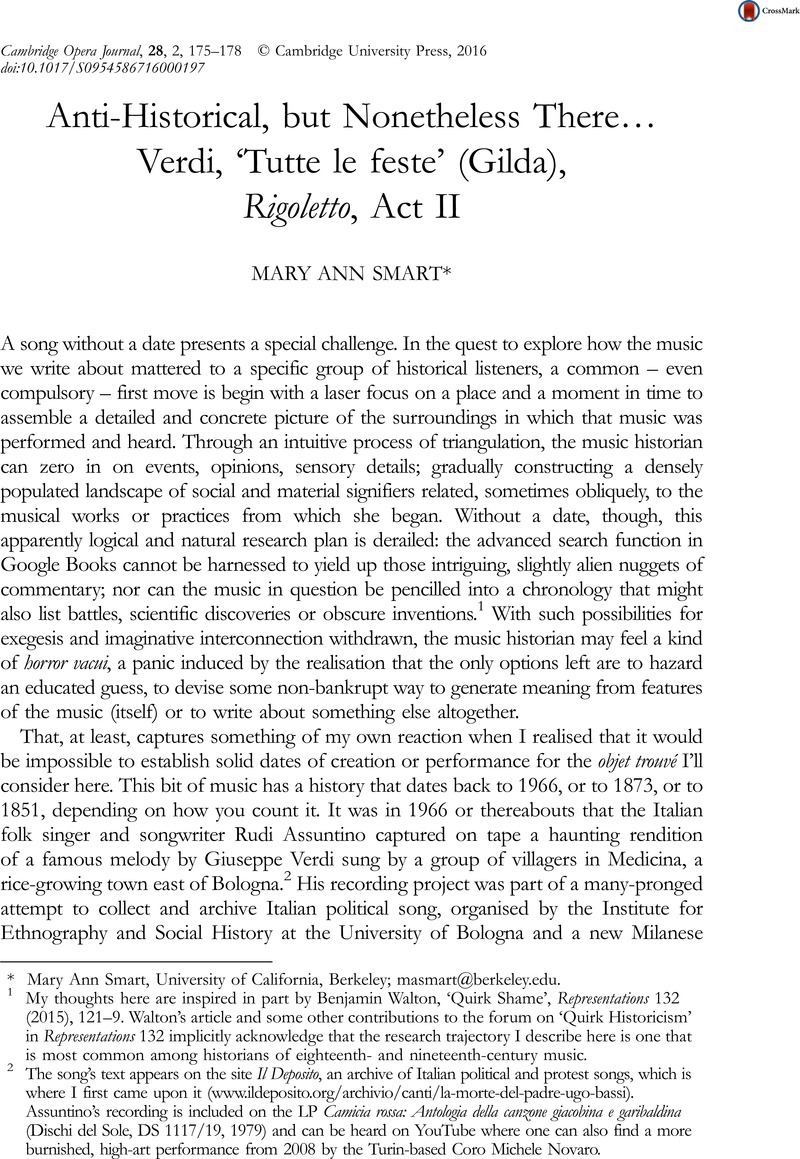 1 My thoughts here are inspired in part by Walton, Benjamin, ‘Quirk Shame’, Representations 132 (2015), 121–129 CrossRefGoogle Scholar. Walton’s article and some other contributions to the forum on ‘Quirk Historicism’ in Representations 132 implicitly acknowledge that the research trajectory I describe here is one that is most common among historians of eighteenth- and nineteenth-century music.

2 The song’s text appears on the site Il Deposito, an archive of Italian political and protest songs, which is where I first came upon it (www.ildeposito.org/archivio/canti/la-morte-del-padre-ugo-bassi). Assuntino’s recording is included on the LP Camicia rossa: Antologia della canzone giacobina e garibaldina (Dischi del Sole, DS 1117/19, 1979) and can be heard on YouTube where one can also find a more burnished, high-art performance from 2008 by the Turin-based Coro Michele Novaro.

4 Lucy Riall has traced the parallel tracks of Roman Catholic histories of martyrs and the cult of martyrdom promoted by the Risorgimento, arguing that the celebration of the martyr both offered symbolic figures around which to rally a sense of ‘collective belonging’ and achieved the transformation of military failure into symbols of ‘an Italian valor that transcended death, defeat, and political decline’. See her ‘Martyr Cults in Nineteenth-Century Italy’, Journal of Modern History 82 (2010), 255–87. Riall shows that the martyr cult was solidified even before Bassi’s death, by the publication of Atto Vannucci’s 1848 book I martiri della libertà italiana, which was reprinted seven times between 1849 and 1887, and remained in print throughout the nineteenth century (269).

6 The occasions on which the Ernani chorus was used for political purposes are listed and discussed in Stamatov, Peter, ‘Interpretive Activism and the Political Uses of Verdi’s Operas in the 1840s’, American Sociological Review 67 (2002), 345–366 CrossRefGoogle Scholar. The simplest alteration to the sung text involved substituting the name ‘Pio’ for ‘Carlo’ (the sixteenth-century Spanish king in Ernani), as in ‘O sommo Pio’ and (later in the same chorus) ‘a Pio Nono onore’.