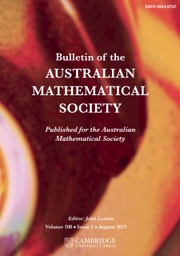 Part of: Representation theory of groups

1 Statement of the problem

$\Psi $ of a finite group inherited by all its subgroups. Important examples of such a property are the following: cyclicity; commutativity; nilpotence; solvability. A natural question arises: how large is a normal

$\Psi $ -subgroup in an arbitrary finite group G? A more precise formulation of this question is the following.

Question 1.1. Given a finite group G with

$\Psi $ -subgroup whose index is bounded by some function

$\Psi $ . We are interested in stronger bounds, in particular those of shape

Theorem 1.2. If a finite group G has a cyclic subgroup

Theorem 1.4. Let G be a finite group and let

Although their proof does not yield an explicit value, they conjectured that

$c \le 7$ . This conjecture is closely related to the following problem [Reference Khukhro and Mazurov7, Problem 17.41(b)].

Problem 1.6. Let H be a solvable subgroup of a finite group G that has no nontrivial solvable normal subgroups. Do there always exist five conjugates of H whose intersection is trivial?

Before we explain how Problem 1.6 is related to Question 1.1, we need to introduce some notation. Problem 1.6 can be reformulated using the notion of base size.

Definition 1.7. Assume that a finite group G acts on a set

$\alpha \in \Omega $ is G-regular if its stabiliser in G is trivial. Define the action of G on

If G acts faithfully and transitively on

$\Omega $ , then the minimal number k such that the set

$b(G).$ For a positive integer m, a regular point in

$\Omega .$ Denote the number of G-regular orbits on

$\Omega $ of right cosets of a subgroup H, then

$G/H_G$ acts faithfully and transitively on

Therefore, for G and H, as in Problem 1.6, the existence of five conjugates of H whose intersection is trivial is equivalent to the statement that

$5$ is the best possible bound for

$H=\mathrm {Sym}(4) \wr \mathrm {Sym}(2).$ This can be easily verified. In fact, there are infinitely many examples with

$\Omega $ and let H be a point stabiliser, so

and if Problem 1.6 has a positive answer, then

Problem 1.6 is essentially reduced to the case when G is almost simple by Vdovin [Reference Vdovin9]. In particular, to solve Problem 1.6, it is sufficient to prove

for every almost simple group G and each of its maximal solvable subgroups H.

We study the situation when

$G_0$ is a simple classical group of Lie type isomorphic to

$(n,q)$ and G is an almost simple classical group with socle isomorphic to

$G_0$ with its group of inner automorphisms, so

$G_0={\textrm {PSp}}_n(q)$ , we also assume that G contains neither graph nor graph-field automorphisms (see [Reference Gorenstein, Lyons and Solomon5, Definition 2.5.10]). Therefore, in our results, G is an arbitrary almost simple group with socle

If q is even, then

$X/N$ is isomorphic to a subgroup of

Thus, it suffices to consider the situation when H is a maximal solvable subgroup of

$X,$ then S is solvable and

It is convenient to work with matrix groups, so we formulate our main results as follows.

Thesis submitted to the University of Auckland in February 2021; degree approved on 11 October 2021; supervisors Eamonn O’Brien and Jianbel An.