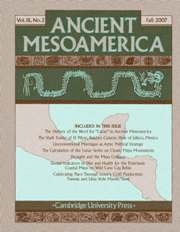 Writing the History of the Word for Cacao in Ancient Mesoamerica