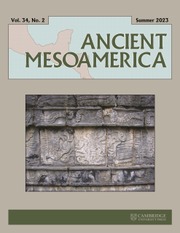 Ancient Mesoamerica is the international forum for the method, theory, substance and interpretation of Mesoamerican archaeology, art history and ethnohistory. The journal publishes papers chiefly concerned with the Pre-Columbian archaeology of the Mesoamerican region, but also features articles from other disciplines including ethnohistory, historical archaeology and ethnoarchaeology. Topics covered include the origins of agriculture, the economic base of city states and empires, political organisation from the Formative through the Early Colonial periods, the development and function of early writing, and the use of iconography to reconstruct ancient religious beliefs and practices.

"Tula was one of the most important prehispanic urban centers in Central Mexico, reaching the height of its influence during the Early Postclassic period, c. A.D. 900-1150. Most current knowledge of the city and its history was obtained from large scale programs of survey and excavation conducted during the latter part of the last century.  Since that time, archaeological research at Tula has continued in the form of smaller scale, focused research projects and  numerous programs of archaeological salvage and rescue that have prevented the loss of knowledge of substantial portions of the ancient city that lie outside its protected area.

"The Special Section, Tula in the Twenty-First Century: New Data, New Perspectives, New Insights, features the most significant results of these various investigations, which collectively provide wholly new insights into Tula's origins, development, demise, and aftermath, and shed considerable light upon what was clearly a large, highly organized, and cosmopolitan city. It is currently free to access until the end of May 2021." Dan M. Healan