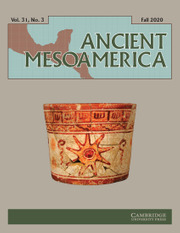 Special Section: Borders, Frontiers, and Boundaries in the Maya World: Concepts and Theory