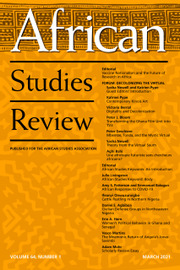 Forum: Decolonizing the Virtual: Future Knowledges and the Extrahuman in Africa