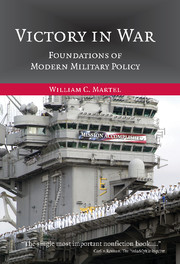 For millennia, policymakers and statesmen have grappled with questions about the concept of victory in war. How long does it take to achieve victory and how do we know when victory is achieved? And, as highlighted by the wars against Afghanistan and Iraq, is it possible to win a war and yet lose the peace? The premise of this book is that we do not have a modern theory about victory and that, in order to answer these questions, we need one. This book explores historical definitions of victory, how victory has evolved, and how it has been implemented in war. It also subsequently develops the intellectual foundations of a modern pre-theory of victory, and discusses the military instruments necessary for victory in the twenty-first century using case studies that include US military intervention in Panama, Libya, Persian Gulf War, Bosnia/Kosovo, Afghanistan, and Iraq.

"The single most important nonfiction book of this season."
-Carlin Romano, The Philadelphia Inquirer

"William Martel's Victory in War is a scholarly and well researched exploration of a subject that is increasingly drawing our attention; what is the meaning of victory in today's context. Drawing on history, Martel explores thoroughly different victories and defeats and what led to them. His study will be a major contribution to the evolution of military strategy. I commend it to all who are serious students of international affairs."
-Frank C. Carlucci, Former Secretary of Defense and National Security Adviser

"This book addresses an important and pertinent topic. It contributes substantially to the ongoing debate in the United States and, indeed, in most countries, about the meaning of victory in war."
-James F. Miskel, Professor, National Security Affairs, Naval War College

"We are living today in a New Era in which the instruments of war, the restraints on their use and the nature of both warfare and its combatants have all evolved. These changes make it increasingly important to develop a relevant concept of victory as a guide to those who make the decisions regarding committing the nation to any type of modern warfare. Victory in War is a positive contribution to that essential development."
-Admiral William T Pendley (USN ret.)

"Martel gives us an important book on a pressing subject of overriding importance to policy makers and military planners. Namely, how do we define victory in the post-modern, post-heroic age of gritty little wars waged to stop regional bullies, terrorists and other desperadoes?"
-Geoff Wawro, Professor of Military History, University of North Texas

"What does it mean to win a war? This question has never been more important than it is today, as ongoing conflicts in Iraq and Afghanistan raise existential questions about the meaning of victory. Yet among the hundreds of works of serious military theory from ancient times to the present, few writers have addressed this question directly, and none has done so systematically. In Victory in War, William Martel takes on the complicated question of what victory in war really means. He has produced an important work on a vitally important subject that should serve as the starting point for productive research for decades to come."
-Fred Kagan, Resident Scholar, American Enterprise Institute

"Because of the lessons, historical perspective, and inherent knowledge to be gained from Victory in War, I highly recommend that every military officer in the Department of Defense read it. Martel’s study is the timeliest and one of the most important books written on strategy for the profession of arms in the recent past."
-Lt Col Chris Wrenn, USAF, Air Force, Air & Space Power Journal

"[...]An important and ambitious book. It should be read by students in all of the U.S. senior-level war colleges and advanced operational planning programs. It is also recommended to the audience of political scientists and military historians who are interested in developing the theory of victory broached in this study. Finally it is a must read for any politician who has aspirations to national leadership."
-Proceedings

"The principal value of this book is in the very coherent discussion of the theories and concepts of victory. Students of political science and military professionals at war colleges will benefit greatly from these well-documented sections. Nearly one hundred pages of notes and an index of over fifteen pages make this an excellent gateway resource to further study."
-Kenneth P. Hansen, Centre for Foreign Policy Studies

"His research is impressive, and the definitions he created will, it is so to be hoped, help policy makers of the future in their planning for the use of military force."
-Edward M. Coffman, MHQ

"William C. Martel is to be congratulated for taking on such a controversial yet vital topic, and admired for the sheer ambition of his endeavour[...]this book is to be recommended for provoking thought on this matter."
-Theo Farrell, King's College London, The International History Review