Home
The Transformation of Europe

The Transformation of Europe 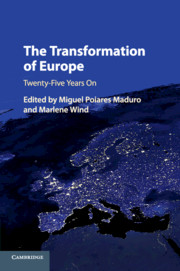 Joseph Weiler's The Transformation of Europe is one of the most influential works in the history of European studies. Twenty-five years after its original publication, this new collection of essays pays tribute to Weiler's legacy by discussing some of the most pressing issues in contemporary European Union law, policy and constitutionalism. The book does not intend to be a simple expression of intellectual esteem for Weiler's seminal work; instead, the collection honours it by critically engaging with some of its assumptions and theses. Overall, it shows how a study of 1991 can still be fundamental to the present and future of the EU, including the challenges of Brexit and Eurozone crises.

'Joseph Weiler's 'The Transformation of Europe' was a seminal article that placed previous developments in sharp perspective, and contained valuable insights on the future challenges facing the EU. The article has stood the test of time. This volume provides a fitting tribute to Weiler's article, with important contributions from prominent scholars in the field that reflect on Weiler's scholarship from a variety of perspectives.'

''The Transformation of Europe' had a decisive impact on the constitution of a smarter knowledge about European integration. It helped a generation of scholars to liberate themselves from the notion of a postwar new European order placed above the fray of inter-state relations and agonistic about political preferences and social conflicts, ideological differences and value choices. It made them aware of the amorphous, conflictive and precarious character of European integration. It reintroduced in the picture the tension inherent in a political project making the existence of states subject to their coexistence and it turned this tension into the normative core of the project. This book is an effort by the same generation of scholars to revisit 'The Transformation of Europe' in view of their own conceptions developed since and thanks to the publication of the piece. A superb exercise of self-reflection and reappropriation of knowledge. A unique way of rethinking Europe in our time.”

'Amongst the many possible definitions of a ‘classic’, two features frequently arise. A classic most often connects worlds or ideas that are generally seen as distinct, and it stands the test of time: It may be revisited, amended, possibly improved, but a classic always provides us with a lens through which we understand the world. Weiler’s The Transformation of Europe certainly meets these criteria and, as such, deserves the attention it gets here from a group of distinguished scholars.'

'This outstanding collection of essays transforms the 'Transformation of Europe'. Marking the 25th anniversary of Joseph Weiler’s famous essay by that name, the authors take stock of how the European Union has developed in the quarter century since the essay was published, showing how Weiler’s then-revolutionary blending of legal and political analysis remains the most useful way to comprehend the EU. As European crises have proliferated, Weiler’s analysis of the structural tensions in the European project has looked more and more prescient. Legitimacy remains in short supply; European values are under stress. But the authors - an all-star cast of EU experts with a new essay by Professor Weiler himself - explore the way forward from the EU’s present state of crisis and self-doubt. This collection is a compelling addition to the reading list of everyone concerned with the past, present and future of the European Union.'

'This inspiring interdisciplinary, international and inter-generational collection of essays reinforces how Joseph Weiler’s vivid writing and intriguing arguments energize the minds of scholars from diverse fields even today.'