Home
Thou Shalt Have No Other Gods before Me

Thou Shalt Have No Other Gods before Me

Why Governments Discriminate against Religious Minorities 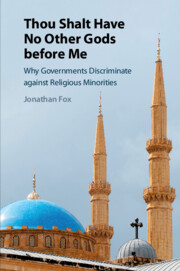 This book is among the most thorough and comprehensive analysis of the causes of religious discrimination to date, complete with detailed illustrations and anecdotes. Jonathan Fox examines the causes of government-based religious discrimination (GRD) against 771 minorities in 183 countries over the course of twenty-five years, while offering possible reasons for why some minorities are discriminated against more than others. Fox illustrates the complexities inherent in the causes of GRD, which can emerge from secular ideologies, religious monopolies, anti-cult policies, security concerns and more. Western democracies tend to discriminate more than Christian-majority countries in the developing world, whether they are democratic or not. While the causes of GRD are ubiquitous, they play out in vastly different ways across world regions and religious traditions. This book serves as a method for better understanding this particular form of discrimination, so that we may have the tools to better combat it and foster compassion across people of different religions and cultures.

'Thou Shalt Have No Other Gods Before Me is, to date, the most systematic and thorough analysis of contemporary governmental discrimination against minorities. It is an invaluable resource for scholars and students of religion and politics.'

'Relying on more recent and even more extensive data than his previous studies, Fox convincingly challenges many dearly held assumptions. Liberal democracies are not the most religiously tolerant, and secular and religious ideologies alike are a source of increased government regulation of religion.'

‘The book is neither fast, easy, nor cheap to read, but it is absolutely worth the price of admission … Fox’s analysis truly shines in the comparisons and renders its most startling conclusions ...’

‘… Fox offers a sweeping empirical assessment of potential explanations for religious discrimination - defined as government restrictions on religious practices of minorities only … Fox certainly challenges us to change our minds on some deeply held beliefs concerning the state of religious tolerance around the world.’

‘As with any book by Fox, this latest addition comes chock-full of fresh data on religious policy: round 3 of the Religion and the State Religious Minorities Data Set with a rich set of indicators on 771 religious minorities in 183 countries for the period 1990–2014. The dataset also contains new measures on the social discrimination of religious minorities by non-state actors, which will prove valuable to many researchers.’

‘The book can be read as a challenge to the dominant rational-choice perspective in political science, due to its emphasis on religious and secular ideologies that shape government policies. It is a welcome addition to the literature on religion and politics and a must-read for those who study religious freedom.’

‘… a powerful and informative volume and will serve well all readers interested the relationship between governments worldwide and their religious minorities.’