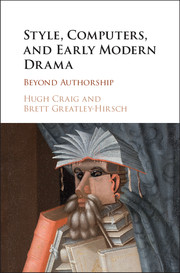 Hugh Craig and Brett Greatley-Hirsch extend the computational analysis introduced in Shakespeare, Computers, and the Mystery of Authorship (edited by Hugh Craig and Arthur F. Kinney; Cambridge, 2009) beyond problems of authorship attribution to address broader issues of literary history. Using new methods to answer long-standing questions and challenge traditional assumptions about the underlying patterns and contrasts in the plays of Shakespeare and his contemporaries, Style, Computers, and Early Modern Drama sheds light on, for example, different linguistic usages between plays written in verse and prose, company styles and different character types. As a shift from a canonical survey to a corpus-based literary history founded on a statistical analysis of language, this book represents a fundamentally new approach to the study of English Renaissance literature and proposes a new model and rationale for future computational scholarship in early modern literary studies.

‘This is an outstanding book of major importance to the field of Shakespeare studies specifically and to the wider field of literary studies in general. As well as conveying new knowledge of exceptional interest, it is written in a style that makes it comprehensible by a wide, non-specialist readership. I anticipate that it will generate intense interest, not least because it debunks a series of current myths about authorship and the style of drama in Shakespeare's time, and introduces new methods of literary criticism.'

'Hugh Craig and Brett Greatley-Hirsch make the case for computational stylistics as a source of more objective generalizations about and insights into the drama of the period. … Their approach could be a body blow to partial, idiosyncratic and subjective literary criticism and to innumerate or illogical scholars.'

'Computers and electronic databases have revolutionized techniques of author attribution, but here Craig and Greatley-Hirsch are concerned with matters of dramatic criticism and history. Desirable attributes of investigators in ‘the digital humanities’ are that they should be sensitive to traditional literary and dramatic values and knowledgeable about the current state of scholarship. Craig and Greatley-Hirsch are well qualified on both counts.'

'Hugh Craig and Brett Greatley-Hirsch have redefined the scope of computational analyses of early modern drama and set an impressive standard for distant reading approaches to the canon.'

'As a work of exploration in the use of sophisticated quantitative methods applied to prima facie unrelated questions of interest, Style, Computers, and Early Modern Drama is a fitting tribute to its dedicatee, John Burrows.'

'Style, Computers, and Early Modern Drama is uncommonly good at provoking fresh ways of looking at the field. … If machine reading at its best cues human readers to think anew, Craig and Greatley-Hirsch demonstrate on what terms, and with what tools, it does so.'

'The project offers a number of useful provocations to scholars of early modern drama and theater … reflecting a commitment to methodological transparency that should serve as an example for practitioners of digital humanities across disciplines and time periods.'