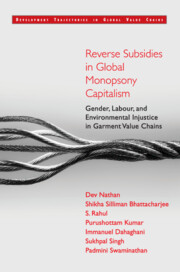 This book provides a firm analytical base to discussions about injustice and the unequal distribution of gains from global production in the form of global monopsony capitalism. It utilizes the concept of reverse subsidies as the purchase of gendered labour and environmental services below their costs of production in garment value chains in India and other garment producing countries, such as Bangladesh and Cambodia. Environmental services, such as freshwater for garment manufacture and land for cotton production, are degraded by overuse and untreated waste disposal. The resulting higher profits from the low prices of garments are captured by global brands, using their monopsony position, with few buyers and myriad sellers, in the market. This book links the concept of reverse subsidies with those of injustice, inequality and sustainability in global production.

‘Reverse Subsidies in Global Production is an important book and one that brings together telling evidence in a compelling way. The authors analyze the injustices in global value chains and, by extension, the global capitalist economy by interrogating the nature of the interactions of the different segments of the chains: from the producers of inputs of the production workers to the suppliers and brand name buyers. They introduce a concept of critical important to understanding these interactions: the concept of ‘reverse subsidies'. Subsidies are widely understood as amounts of funding provided by the state to allow goods and services to be provided or consumed below their cost of production. Reverse subsidies, by contrast, are below-cost provision of goods and services by workers to the profit of suppliers and, more so, brand name companies. This happens because brand name companies download so many costs and risks onto workers – through irregular work orders, low wages or piece rates, delayed payments and rejected goods – that the workers often operate at a loss.'

‘Using reverse subsidies for the basis of analysis is spot on. Continuing to expose the fundamentally unjust economic model that underpins global supply chains is so important and is the pressure that is needed to bring about more effective and sustainable change.'

‘An important contribution to the on-going debate organized around the idea of the ‘reverse subsidies' extracted from workers and the environment in global value chains'.'

‘Reverse Subsidies in Global Monopsony Capitalism is a breakthrough book because it develops the ideas of power, social reproduction and economic justice – especially related to gender, climate and caste – through a lens of contemporary global production, organized as it is in complex global value chains, dominated by brand-label firms and subject to deep asymmetries of bargaining power at the level of the firm, the nation and the household. The focus is on south Asian apparel production, but the implications of the framing and the findings go well beyond this region and this sector to give deep insight into the persistence of underdevelopment in a world economy characterized by rapid capital flow and highly liberalized trade.'

William Milberg - Dean and Professor of Economics, The New School for Social Research

‘SEWA (Self Employed Women's Association) started organising women workers – working from home such as – quilt makers and garment workers, four decades ago. In fact the work of these women workers was not even counted or considered as work either by the contractors or by the Government. It was SEWA that coined the term ‘Homebased Workers.' Today SEWA is glad that this term and the work of women is accepted and recognised globally. In this book, we are happy to note that the authors have integrated homeworkers into the overall analysis of exploitative conditions in global value chains.'