His Reaction and Response to the Classical Tradition 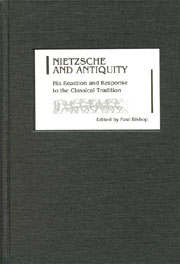 This volume collects a wide-ranging set of essays examining Friedrich Nietzsche's engagement with antiquity in all its aspects. It investigates Nietzsche's reaction and response to the concept of "classicism," with particular reference to his work on Greek culture as a philologist in Basel and later as a philosopher of modernity, and to his reception of German classicism in all his texts. The book should be of interest to students of ancient history and classics, philosophy, comparative literature, and Germanistik. Taken together, these papers suggest that classicism is both a more significant, and a more contested, concept for Nietzsche than is often realized, and it demonstrates the need for a return to a close attention to the intellectual-historical context in terms of which Nietzsche saw himself operating. An awareness of the rich variety of academic backgrounds, methodologies, and techniques of reading evinced in these chapters is perhaps the only way for the contemporary scholar to come to grips with what classicism meant for Nietzsche, and hence what Nietzsche means for us today. The book is divided into five sections - 'The Classical Greeks; Pre-Socratics and Pythagoreans, Cynics and Stoics; Nietzsche and the Platonic Tradition; Contestations; and German Classicism' - and constitutes the first major study of Nietzsche and the classical tradition in a quarter of a century. The contributors are Jessica N. Berry, Benjamin Biebuyck, Danny Praet and Isabelle Vanden Poel, Paul Bishop, R. Bracht Branham, Thomas Brobjer, David Campbell, Alan Cardew, Roy Elveton, Christian Emden, Simon Gillham, John Hamilton, Mark Hammond, Albert Henrichs, Dirk t.D. Held, David F. Horkott, Dylan Jaggard, Fiona Jenkins, Anthony K. Jensen, Laurence Lampert, Nicholas Martin, Thomas A. Meyer, Burkhard Meyer-Sickendiek, John S. Moore, Neville Morley, David N. McNeill, James I. Porter, Martin A. Ruehl, Herman Siemens, Barry Stocker, Friedrich Ulfers and Mark Daniel Cohen, and Peter Yates.