The Economic History of a Segregated America 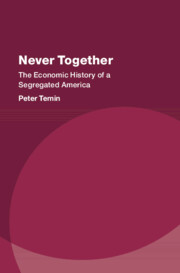 In November 2020, The New York Times asked fifteen on its columnists to 'explain what the past four years have cost America.' Not one of the columnists focused on President Trump's racism. This book seeks to redress this imbalance and bring Black Americans' role in our economy to the forefront. While all humans were created equal, economic history in the United States tells a different story. Reconstruction lasted for only a decade, and Jim Crow laws replaced it. The Civil Rights Movement lasted through the 1960s, yet decayed under President Nixon. The United States has been declining in the Social Product Index, where it now is the lowest of the G7 and 26th in the world. For health and happiness, Temin argues that we need lasting integration efforts that allow Black Americans equal opportunity. This book convincingly integrates Black and white activities into an inclusive economic history of America.

‘The title Never Together perfectly conveys the steely message of this scholarly, sweeping, and scathing distillation of two centuries of economic and political exclusion of Black citizens from American prosperity. I'm deeply impressed with how Temin distilled a huge historical reservoir into a tight thematic argument. It's quite powerful.’

'We live beneath the long shadow of slavery. How could one group have such lower income and wealth than the other? How could their housing and schooling still be so separate? Temin takes us, step by step, through our history to fathom these differences.'

'Never Together is a true innovation in historical writing. Peter Temin retells the story of American Economic History, with African-Americans fully integrated into the tale. Highlighting the race issue accentuates the striking parallels between the Gilded Age and our own times. The book is a tour de force.'

‘In Never Together, pioneering new economic historian Peter Temin offers a sweeping narrative of economic repression of Black America. In this timely volume, Temin starts with the imposition on African American of the status as a pariah class in the colonial period and traces this troubling history through US macro-economic booms and busts into the present day.’

‘Never Together is utterly necessary right now—comprehensive yet clear-eyed, general yet precise. Temin sees race and the differences race makes without being blinded by race or heedless of discrimination’s consequences over the course of two centuries. This is the economic history needed in our new gilded age.’

‘Many tellings of American economic history do not focus on the critical contributions Black Americans have made to our nation. In Never Together, Temin remedies this problem and gives us a rich, inclusive economic history from the American Revolution to the Civil War through the current day. The upshot of this careful historical examination is that progress toward racial equity is far from steady, with important triumphs often stymied by subsequent challenges - an important lesson for everyone seeking to achieve a fairer and more equitable society.’