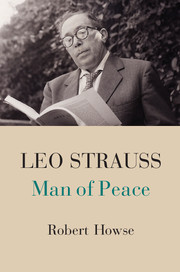 Leo Strauss is known to many people as a thinker of the right, who inspired hawkish views on national security and perhaps advocated war without limits. Moving beyond gossip and innuendo about Strauss's followers and the Bush administration, this book provides the first comprehensive analysis of Strauss's writings on political violence, considering also what he taught in the classroom on this subject. In stark contrast to popular perception, Strauss emerges as a man of peace, favorably disposed to international law and skeptical of imperialism - a critic of radical ideologies who warns of the dangers to free thought and civil society when intellectuals ally themselves with movements that advocate violence. Robert Howse provides new readings of Strauss's confrontation with fascist/Nazi jurist Carl Schmitt, his debate with Alexandre Kojève about philosophy and tyranny, and his works on Machiavelli and Thucydides and examines Strauss's lectures on Kant's Perpetual Peace and Grotius's Rights of War and Peace.

'Even if you are convinced that nothing new or provocative could possibly be said about Leo Strauss, Rob Howse’s book will force you to rethink your position. Both friends and foes of Strauss will find much of interest in this fascinating reinterpretation of one of the canonical figures of twentieth-century political theory. Focusing on Strauss’ ideas about political violence, the volume’s most important achievement is to lay bare the fundamentals of Strauss’ oftentimes neglected international political and legal theory. Strauss poses an intellectual challenge to students of international law and politics, and Howse does a wonderful job sketching out that challenge’s main features.'

'Robert Howse's incisive reconstruction of Leo Strauss' views on the task of political philosophy and the case for liberal democracy makes a superb contribution to the burgeoning body of scholarship on a thinker who is increasingly recognized as a towering figure of twentieth century thought. Drawing on Strauss' intellectual encounters with Carl Schmitt and Alexandre Kojeve, Strauss' interpretations of an array of major figures in the history of political philosophy, and recently released transcripts of Strauss' legendary classes at the University of Chicago, Howse shows that the question of the status of international law was integral to Strauss' philosophical explorations. Howse's book should inspire lively and illuminating debate.'

'As the title makes clear, this book offers the reader a very different Leo Strauss: not one committed to permanent war for the sake of preserving humanity’s noble ends against degradation, but rather a profound thinker committed to peace as the only condition in which philosophy, justice and individuality can flourish. Although willing to admit that war is sometimes necessary, Howse’s Strauss articulates an extra-legal and moral-political standard that can be used to judge actions taken during war. Every chapter of this book is filled with a startling number of brilliant and original insights into Leo Strauss’ relationship to his contemporaries, his understanding of key texts in the history of political thought, and the character of his overall project. Howse’s book will not only spark new debates about, and a renewed interest in Leo Strauss’ life and works, but I am convinced that it will also become the new standard by which any books on Strauss are measured.'

'… what is undeniable is that Howse has produced the clearest articulation of the fundamental role that ‘the international’ occupies in Strauss’ thought. … Howse has done all of us a great service by writing this book.'

'Robert Howse’s Leo Strauss: Man of Peace is an effort to rehabilitate Strauss without supporting those whom he terms the ‘Straussians' … [b]ut beyond Howse’s meditations on Strauss, war and peace … thoughtful, inventive and well-argued … [this] book also makes an important contribution by inquiring into Strauss’ views on philosophers and political life.'

'In Leo Strauss: Man of Peace, the New York University law professor Robert Howse, with the blessing of the Straussian faithful … seeks to set the record straight … [w]hat we gain from Howse’s reinterpretation of Strauss’s views in light of casual remarks that Strauss made in his lectures and seminars is a slightly more capacious view of Strauss as a theorist of international relations.'

'In his own contribution to this discussion, Howse seeks to understand Strauss as Strauss understood himself (to borrow a venerable Straussian precept). He is thus preoccupied with Strauss’ writings, lectures and letters. Like previous authors plowing these fields, however, Howse is also interested to some extent in the phenomenon of the Strauss 'cult' - that is, the fervent, often-cliquish group of Straussian teachers and students whose devotion to the Straussian 'project' has now stretched over several generations.'