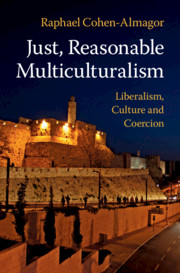 ‘What do you get by insisting on an established set of liberal-democratic values such as justice, reciprocity, autonomy, and not harming others? You get, according to this timely new book, an inescapable defence of reasonable multiculturalism and a principled rejection of unreasonable multiculturalism. Weaving through a thicket of controversial minority cultural practices and nation-state majoritarianism, Raphael Cohen-Almagor presents a powerful liberal-democratic case for the conditional accommodation of cultural traditions.'

‘Just, Reasonable Multiculturalism strives to balance between individual rights and group rights, setting boundaries to government intervention in illiberal cultural practices. It is philosophically astute, pragmatic and sensitive to the political realities of multicultural democratic states. While mastering the philosophical literature concerning multiculturalism, Cohen-Almagor aims to draw on it to good effect, impacting the real world of politics. The book is grounded in liberal philosophy. While Rawls distinguished between ideal theory and non-ideal theory, this book is a work of theory as applied to the messy realities of our actual political lives in a democracy. Any discussion about boundaries is likely to stir debate and this book is no different. Yet Just, Reasonable Multiculturalism is intelligent, thought-provoking and constructive, offering a way past the debate between multiculturalists and communitarians. It shows that liberalism and multiculturalism are reconcilable once reasonable and just limits are kept, and the basic rights of all people are safeguarded.'

‘Cohen-Almagor's scholarship is very broad and deep. He has the ability to develop a profound analytical framework and combine this theoretical approach with numerous examples and applications. His clear and didactic style is, in one word, admirable.'

‘Multiculturalism has polarized academic and public opinion. Some see it as the only way to reconcile the demands of unity and diversity in a multi-ethnic society. Others see it as a way to ghettoize different communities and prevent their interaction and integration. Professor Cohen-Almagor's book is a judicious and perceptive account of the controversy and the way to resolve it. He discusses such important questions as the limits of state action, when the state may interfere with individual liberty, the relation between group rights and individual rights, and the sources of tension between liberalism and multiculturalism. His discussion is invariably fair, insightful and probing. Having laid the theoretical framework in the first part of the book, the author devotes the second to a critical examination of minority and other practices that may appear to offend against a society's values. Here, he skilfully examines several such practices in both liberal and non-liberal societies, and further illuminates the way forward. He takes countries often ignored by multiculturalists, such as Israel, and uses them to disclose tensions within liberalism. This is a fine book, analytically rigorous, comprehensive in scope, and informed by a deep familiarity with contemporary debates. I have no doubt that it represents an important addition to the growing literature on multiculturalism and should receive considerable critical attention.'

‘Professor Cohen-Almagor presents a brilliant and insightful framework for understanding and reconciling ideological trends that create discord in Western nations. Those who wish to understand today's political currents and to seek a way forward should read this thoughtful book. The liberal tradition is divided between liberal toleration and a statist liberalism that seeks to uphold utmost individual autonomy against any incursion by any private party. Intersectionalists demand influence for marginalized groups. Finally, some illiberal cultural minorities seek autonomous existence within the liberal state. Cohen-Almagor deftly navigates among the persuasive but contradictory positions of these antagonists. He charts a sensible course for accommodating minority cultures within liberal states at the present time.'

'[this book] is an important contribution to the literature on multiculturalism and a testament to the author’s thoughtful approach to both political theory and its application to practical politics.'