Home
International Law and the Politics of History

International Law and the Politics of History 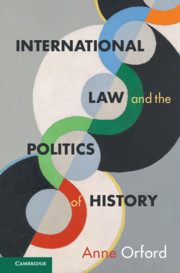 As the future of international law has become a growing site of struggle within and between powerful states, debates over the history of international law have become increasingly heated. International Law and the Politics of History explores the ideological, political, and material stakes of apparently technical disputes over how the legal past should be studied and understood. Drawing on a deep knowledge of the history, theory, and practice of international law, Anne Orford argues that there can be no impartial accounts of international law's past and its relation to empire and capitalism. Rather than looking to history in a doomed attempt to find a new ground for formalist interpretations of what past legal texts really mean or what international regimes are really for, she urges lawyers and historians to embrace the creative role they play in making rather than finding the meaning of international law.

'In this extensive study, Anne Orford brilliantly traces international law’s engagements with history across a century and more, weaving abstruse methodological disputes into an arresting narrative of political possibility foregone. What is history for? And how should it be practiced by those who manage the world’s legal affairs? Anne Orford makes the case for doing things with history, for history as a political practice which can as well be apologetic as transformative. For Orford, international legal history is contested ground, an open field of political possibility and struggle. Everyone is here - the footnotes alone are worth the price! Her plea for an engaged and politically responsible history attuned to the ambiguities of the historical record is an invigorating challenge to everyone who dabbles - or dives deep - into the history of international law.'

‘The recent ‘turn to history’ in the study of international law began with high hopes of rapprochement between disciplines yet has too often served to draw battle lines and multiply misunderstandings. Anne Orford now stands authoritatively above the fray, to clarify the stakes of critical practice for lawyers and historians alike. Her patient, engaged scrutiny of the politics of scholarship may not quieten contention but it should make future engagements both more productive and much more firmly grounded.’

‘International Law and the Politics of History is a powerful rejoinder to the critical excesses to which scholarship in international law has been made subject in recent years by historians claiming law’s habitual misrepresentation of its past. Anne Orford knows her own field far better than the complainants, and it shows. Historians would do well to understand better what they poke before they decide to poke it.’