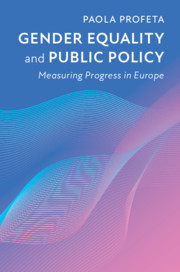 Despite formal UN and European Commission commitments to improve gender imbalances, progress towards gender equality in wealth and pay has progressed at a discouragingly slow pace in recent decades. European countries have been more proactive in their support for corrective policies, such as family leave and gender quotas for corporate boards, yet measuring the effectiveness of these policies has proven difficult. This book offers a close comparative analysis of gender-targeted policies in Europe, providing an in-depth overview of how public policy is shaping gender equality, and how the presence of women in the economy and decision-making positions is itself shaping public policy. Paola Profeta bases her analysis on new data and an innovative interdisciplinary perspective for understanding the relationship between gender, equality and public policy, and their final impact on the European economy and society, with lessons that resonate beyond Europe.

'This ambitious project draws upon insights including from economics, public management, political science and gender theory to interrogate critical questions about gender equality in politics and the workplace. What is the impact of public policy in terms of promoting gender equality? What difference for public policy does it make if there are women leaders in politics and business? Paying particular attention to gender equality in Southern Europe, Paola Profeta argues that a greater understanding is needed of the relationship between public economics (policies) and political economy (policymakers and shapers) in order to analyse the slow and uneven progress of gender equality to date – and the ever present dangers of stalling and regression. This book will be of great interest to both feminist scholars and mainstream scholars concerned with the relationship between public policy and gender equality.'

'Decades after equality before the law between women and men had been reached in most European countries, gender inequities in areas such as education, the labor market, and caring for family members continue to persist. In this deeply researched and accessible book, Paola Profeta summarizes the state of gender equality in Europe today and explains the role that public policy can play in shaping gender differences. Drawing on a wide range of empirical evidence and state-of-the-art methods, Profeta's impressive study also draws a link between gender inequality and global challenges such as population aging, mass migration, and sustainability. A must-read not just for researchers and policymakers, but anyone who wants to learn more about the forces behind gender inequality today and the way forward to a more equal future.'

'Women have broken many glass ceilings (or glass cages) in recent decades. But not all and certainly not universally. Along with democratic spontaneous movements, effective political action is still required, both in terms of reaffirmation of human rights and in terms of measures to realize a true level playing field in which women can prove their competences and inspire positive social change. This book by Paola Profeta represents a valuable addition to the literature on the relationships between public policies and real gender equality. Worth to be read and studied by all those who care about a more balanced society.'

'This excellent book offers a novel perspective on the study of gender and public policy with an approach developed at the intersection of public economics and political economics. The focus is on Europe, which is certainly an interesting laboratory of analysis with studying and comparing policies to promote gender equality. This book is extremely useful for graduate students and professionals but readable also by policy makers.'

'With an economist's eye, Paola Profeta deftly analyzes the reciprocal effects of gender equality and public policies in contemporary Europe. From taxation to maternity leave to childcare provision, Profeta shows how states' policy choices profoundly shape economic gender gaps. This book makes the case for why gender inequality matters not only for women and their families but for sustainable growth in the 21st century.'

'The topic of gender (in)equality is of fundamental importance for our societies. This timely analysis form one of the leaders in the field is comprehensive, careful, balanced and passionate. A must read.'