The Role of Rights 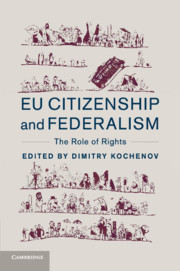 Kochenov's definitive collection examines the under-utilised potential of EU citizenship, proposing and defending its position as a systemic element of EU law endowed with foundational importance. Leading experts in EU constitutional law scrutinise the internal dynamics in the triad of EU citizenship, citizenship rights and the resulting vertical delimitation of powers in Europe, analysing the far-reaching constitutional implications. Linking the constitutional question of federalism and citizenship, the volume establishes an innovative new framework where these rights become agents and rationales of European integration and legal change, located beyond the context of the internal market and free movement. It maps the role of citizenship in this shifting landscape, outlining key options for a Europe of the future.

‘At a time when the European Union is in turmoil, beset by crises most recently including Brexit, a thorough and wide-ranging analysis of the current legal and political status of EU citizenship is extremely welcome. Dimitry Kochenov has assembled a superb line-up of commentators and analysts and produced a comprehensive collection of essays on all aspects of EU citizenship from a federal perspective.'

‘The contributions in this collection provide a comprehensive picture of the citizenship of the Union and its development since its creation by the Maastricht Treaty 25 years ago. It certainly will constitute a source of inspiration for everyone who is reflecting on the potential and the future of European citizenship as a fundamental status of the nationals of the Member States of the European Union.’

‘This brick is a construction site of EU citizenship. It is a huge Gesamtwissenschaftswerk on tiles and pillars, written by a quite select array of scholars summoned by federalist contractor Dimitry Kochenov. Union citizenship is still in scaffolding and the authors show its vulnerability and its promise in illuminating vistas. Stimulating reading for all interested in this elusive and intriguing phenomenon.'

‘Is European Union citizenship merely an annex to the internal market, a ‘market citizenship' for a few privileged cross-border movers; or is it a free-standing citizenship, the ‘fundamental status' of all Europeans, as the European Court of Justice ambitiously pronounced it a few years ago? There is no clear answer and the legal reality is twisted, as this impressive volume by leading scholars and practitioners attests. This is the single best source to consult where EU citizenship stands today.'

‘Twenty-four years after the Treaty of Maastricht, the legal and political concept of European Union citizenship remains as important, and yet as contested, as it then was. Two decades of jurisprudence from the Court of Justice, at first expanding the concept and its contingent rights and then rowing back on some of its previous decisions in the field, combined with extensive changes to EU legislation on free movement and migration more generally, have led to extensive and sometimes groundbreaking studies by leading EU scholars and practitioners. Many of them contribute to this book, making it both a leading work on European Union citizenship and a timely reminder of how complex the legal issues raised by this innovative status are as free movement itself becomes a point of contention within the EU.'

‘This work will be a milestone in the understanding of Union citizenship as federal citizenship. Erudite and provocative, this collection of essays will be essential reading for a generation (or two!) of scholars of European integration.’

'This collection impressively demonstrates the sheer breadth of legal domains touched by the status of EU citizenship and gives a complete overview of the current state of affairs in this field.'

'EU Citizenship and Federalism is a work of art, not just because of the cover, but especially for its content. Looking through a federal lens, where does EU citizenship stand, how did it get there and where is it going? These questions are at the core of thirty contributions from noted scholars in this impressive volume. What makes this book a work of art is how it reflects not just one side of the issues, but shows numerous opposing views.'