The Politics of Public Law and Judicial Review in Pakistan 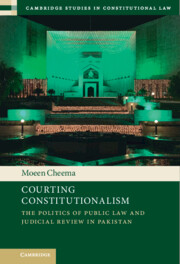 Over the last decade, the Supreme Court of Pakistan has emerged as a powerful and overtly political institution. While the strong form of judicial review adopted by the Supreme Court has fostered the perception of a sudden and ahistorical judicialisation of politics, the judiciary's prominent role in adjudicating issues of governance and statecraft was long in the making. This book presents a deeply contextualised account of law in Pakistan and situates the judicial review jurisprudence of the superior courts in the context of historical developments in constitutional politics, evolution of state structures and broader social transformations. This book highlights that the bedrock of judicial review has remained in administrative law; it is through the consistent development of the 'Writ jurisdiction' and the judicial review of administrative action that Pakistan's superior courts have progressively carved an expansive institutional role and aggrandised themselves to the status of the regulator of the state.

‘In this beautifully written and meticulously researched book, Moeen Cheema complicates and enriches common narratives of judicialisation of politics since World War II by showing how, since independence, the Supreme Court of Pakistan has creatively built on foundations laid in the colonial period using materials and resources provided by concepts and tools of administrative legality, not constitutional rights. By keeping a relatively low political profile, the Court navigated the choppy waters of a divided society during alternating periods of civilian, military and military-backed civilian rule to become a major constitutional player. This is a gripping and important story.'

‘A landmark contribution to the study of public law, Courting Constitutionalism is at once a rich contextual inquiry into the construction of judicial power in Pakistan, a superb exemplar of the best traditions of historical institutionalism, and an outstanding model for the next generation of constitutional studies. Truly magnificent!'

Richard Albert - Professor of World Constitutions and Director of Constitutional Studies, The University of Texas at Austin

‘Moeen Cheema's account of the Pakistani judiciary's evolution into a key actor in what Ran Hirschl calls constitutional “mega-politics” is thoughtful, rigorous and informative. Its contribution to scholarship is not restricted to Pakistani or subcontinental constitutionalism alone. This study of the dramatic growth of judicial power in a context that has oscillated between military, quasi-military and hybrid-civil regimes is a serious provocation to a field that continues to debate the legitimacy of judicial review largely within the narrow confines of the “counter-majoritarian difficulty” in democratic regimes. The book's historical institutionalist method offers rich insights for appreciating how courts, as strategic constitutional institutions, manage not only to survive and but also to thrive in seemingly inhospitable ground.'