Sexual Orientation, Discretion Reasoning and the Scope of Refugee Protection 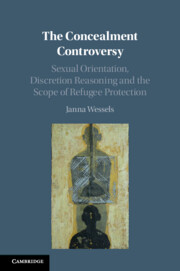 The idea that a claim for international protection can be rejected on the basis that the claimant behave 'discreetly' in their country of origin has remained resilient in asylum claims based on sexual orientation, but also other grounds of claim. This is significant because requiring an asylum-seeker to forgo the reason for which they are persecuted questions the very rationale of refugee protection. This book represents the first principled examination of concealment in refugee law. Janna Wessels connects the different strands of the long-standing debate in both common and civil law jurisdictions and scholarship concerning the question of whether and under which circumstances a claimant must conceal to avoid persecution. In so doing, Wessels uncovers a fundamental tension at the core of the refugee concept. By using sexuality as a lens, this study breaks new ground regarding sexual orientation claims and wider issues surrounding the refugee definition.

‘Janna Wessels’ detailed and enthralling book guides the reader on a journey into the complex underbelly of refugee law, and asks some of the most fundamental questions about the scope of state responsibilities to protect persons at risk of harm on account of their inherent characteristics (race, ethnicity, sex or gender, sexual orientation), or their opinions and beliefs. While her analysis is focused on the often incompatible jurisprudence and literature on sexual orientation claims, the book is relevant for all types of refugee claims. It is a compelling read.’

‘Among the many books on the interpretation of the refugee definition, this one clearly stands out. It masterfully demonstrates how ‘discretion’ reasoning is deeply entrenched in both common and civil law jurisdictions, and provides a path for reconsidering the scope of refugee protection. Superbly written, highly original, it is a must-read for academics and practitioners working in this area of law.’

‘This timely and provocative book prompts a reconsideration of what, and whom, refugee law protects – and why. Wessels’ detailed study argues that ‘discretion’ reasoning permeates refugee decision-making across the board, resulting in systemic instability. Her work provides insights into the relationship between human rights law and refugee law, and the protection regime as a whole.

‘This book is the result of a fascinating project at the cutting edge of refugee legal studies. Wessels examines how (primarily Global North) states make decisions on who is entitled to international protection from a new perspective – the presumption of a duty on a refugee to behave discreetly in their home country – which has entered decision making in many countries. This book is mandatory reading for all refugee law scholars.’

‘The Concealment Controversy is an original and timely intervention in a longstanding debate within refugee law, namely, the role of ‘discretion reasoning’. Wessels examines why the notion has proven so remarkably resistant despite consistent critique. Drawing on queer theory, and a (rare) close examination of civil law jurisprudence, Wessels expertly identifies the tensions in current approaches. Her critical and thought-provoking work promises to offer new ways of approaching refugee protection and is a must-read for students, scholars, and refugee decision makers alike.’

‘Wessels’ response to an important gap in refugee law scholarship will be paradigmatic for future debates on the substance and method of refugee status determination. I find her work to be thoughtfully argued, profound and accessible. She invites us to rethink the tenets of refugee law in a way that is both intellectually honest and sensitive to the price they exact.’