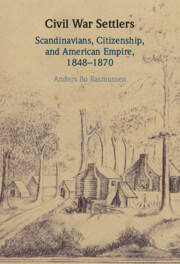 Civil War Settlers is the first comprehensive analysis of Scandinavian Americans and their participation in the US Civil War. Based on thousands of sources in multiple languages, that have to date been inaccessible to most US historians, Anders Bo Rasmussen brings the untold story of Scandinavian American immigrants to life by focusing on their lived community experience and positioning it within the larger context of western settler colonialism. Associating American citizenship with liberty and equality, Scandinavian immigrants openly opposed slavery and were among the most enthusiastic foreign-born supporters of the early Republican Party. However, the malleable concept of citizenship was used by immigrants to resist draft service, and support a white man's republic through territorial expansion on American Indian land and into the Caribbean. Consequently, Scandinavian immigrants after emancipation proved to be reactionary Republicans, not abolitionists. This unique approach to the Civil War sheds new light on how whiteness and access to territory formed an integral part of American immigration history.

'This ambitious, well-researched, voluminously documented history weaves together the bracing contradictions of the nineteenth century US: immigration, Native American displacement and dispossession, and slavery. In his sophisticated analysis, Rasmussen moves back and forth from particular Norwegian, Swedish, and Danish immigrant communities to Old World ideologies and nation-making debates and, in the process, makes a convincing case for the usefulness of synthesizing Scandinavian immigration history.'

'In this rich, deeply researched, and often surprising study, Rasmussen deftly shows how the outlook and experiences of Scandinavian immigrants and officials shaped their engagement with American dynamics of nationhood, race, and settler colonialism.'

'Rasmussen reveals how white supremacy in the nineteenth century was both a national and transnational project. Scandinavian immigrants’ efforts during the Civil War to champion free land and free labor paradoxically led to a possessive investment in whiteness that helped create a racial dictatorship at home and an empire overseas. Rasmussen’s splendid work will impel future historians to look beyond national boundaries, to explore the roles played by the world in the nation and the nation in the world.'

George Lipsitz - author of The Possessive Investment in Whiteness

'Civil War Settlers is a nuanced study that places the experiences of Civil War-era Scandinavian Americans within a sweeping, national context. As such, this is a welcome contribution to our understanding of immigration, race, and citizenship in Civil War America.'

'Rasmussen has produced an important book, revealing the double colonial nature of the United States in the Civil War as it explores colonizing formerly enslaved people in the Caribbean and enlisting Scandinavian immigrants in the project of homesteading land taken from Native Americans.'