The BRICS-Lawyers' Guide to Global Cooperation 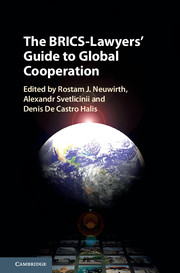 In the international trade and development arena, new and developing economies have created a block that is known as BRICS - Brazil, Russia, India, China and South Africa. Initially conceived to drive global change through economic growth, the financial crisis and reversal of fortunes of the BRICS nations have raised questions about their ability to have an impact on the governance of global affairs. This book explores the role of law in various areas of BRICS cooperation including: trade, investment, competition, intellectual property, energy, consumer protection, financial services, space exploration and legal education. It not only covers the specifics of each of the BRICS nations in the selected areas, but also offers innovative and forward-looking perspectives on the BRICS cooperation and their contribution to the reform of the global governance networks. This is a unique reference book suitable for academics, government officials, legal practitioners, business executives, researchers and students.

'The authors' aim is to contribute to the understanding not only of the law’s role in the BRICS countries but also of law’s constructive role in various frameworks of cooperation at the multilateral or global level.​ The book illustrates the mission of law and legal frameworks in theory and in practice of BRICS activities and highlights what law means for the BRICS countries’ successful cooperation.'

'This book advocates 'BRICS for bridges not walls' and closes a gap in scholarship and academic debate by providing a (not yet duly considered) legal perspective of BRICS cooperation - one of the many reasons it deserves to be read. This book is a very interesting read, a worthwhile acquisition and a unique reference book for academics, government officials, legal practitioners, researchers and students who work in the area of global governance.'

‘The book is a real treasure that will appeal to many lawyers, including legal scholars and legal practitioners interested in a better understanding and wider knowledge of the legal aspects of the BRICS cooperation.’

‘Only on the basis of a legal foundation can BRICS continue its evolution towards an ever-more cooperative, interrelated, and ultimately maybe even integrated community of states. Pointing this out most clearly and providing illuminating and inspiring insight into the complexities of the BRICS realities, the book provides an invaluable resource and reference for scholars, practitioners, and anybody interested in international and global governance - under a political, an economic, and most importantly: a legal perspective.’