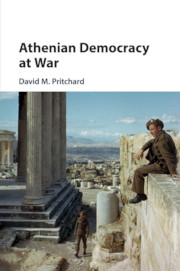 Classical Athens perfected direct democracy. The plays of this ancient Greek state are still staged today. These achievements are rightly revered. Less well known is the other side of this success story. Democratic Athens completely transformed warfare and became a superpower. The Athenian armed forces were unmatched in size and professionalism. This book explores the major reasons behind this military success. It shows how democracy helped the Athenians to be better soldiers. For the first time David M. Pritchard studies, together, all four branches of the armed forces. He focuses on the background of those who fought Athens' wars and on what they thought about doing so. His book reveals the common practices that Athens used right across the armed forces and shows how Athens' pro-war culture had a big impact on civilian life. The book puts the study of Athenian democracy at war on an entirely new footing.

'This comprehensive book by internationally respected Australian scholar Dr Pritchard - the first such, involving a new theory about democracy and warmaking in ancient Athens - addresses the relationship between the fact of Athens’ democracy and the fact of its transformational military record. Classical Athens is famous for its direct democracy and innovative culture, but less well understood is that it was its democracy that caused this military success.'

'Pritchard's book gives stunning insights into Athenian democracy's attitude to war. Did the Persian Wars influence the development of Athenian democracy? Why were wars so important for the prestige of Athenian citizens? How did the Athenians finance and organise their wars? In answering these fundamental questions his book analyses brilliantly the mutual impact that Athenian democracy and war had on each other.'

'David Pritchard has written the definitive account of classical Athenian warfare. He offers astute analyses of the Athenian armed forces, military finance, the ideology of war, war and sport, and the relationship between warfare and democracy. His arguments are careful; his documentation is meticulous. It will be essential reading for all serious students of Athens, democracy, and warfare.'

'A masterful, debatable and elegantly crafted analysis of the world's first democratic empire and why it was no protagonist of 'democratic peace'.'

'… this thought-provoking and vital book (aimed at 'students and teachers, interested general readers and scholars alike') is a must for anyone interested not just in classical Greek warfare and politics but in what this can tell us about the relationship between democracies in general and the military.'

David Stuttard Source: Classics for All

‘… this intelligent, thought-provoking book … is an extremely useful tool for a reader interested in a comprehensive, critical overview …’

‘… an excellent work of scholarship …’

‘This is an excellent, up-to-date discussion of the composition and methods of conscription and remuneration of hoplites, sailors, archers and horsemen …’

‘I greatly admire and have benefitted from Pritchard’s scholarly program, and he is an essential author for those working on Athens and war in any respect. The volume here under review contains many up-to-date references and facts about a great many topics pertaining to classical Athens at war.’

‘Athenian Democracy at War is highly recommended for any scholar of Athens and democracy in the ancient world, because it successfully fills a gap underlining the reasons for the effectiveness of Athens in war, and how it could train professional armies and launch huge fleets which ruled the Aegean with utter dominance. It does not only analyse the role war played in Athenian culture and democracy, but also the role democracy played in the development of warfare in form and scale …’