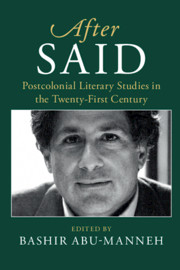 By the time of his death in 2003, Edward Said was one of the most famous literary critics of the twentieth century. Said's work has been hugely influential far beyond academia. As a prominent advocate for the Palestinian cause and noted cultural critic, Said redefined the role of the public intellectual. This volume explores the problems and opportunities afforded by Said's work: its productive and generative capacities as well as its in-built limitations. After Said captures the essence of Said's intellectual and political contribution and his extensive impact on postcolonial studies. It examines his legacy by critically elaborating his core concepts and arguments. Among the issues it tackles are humanism, Orientalism, culture and imperialism, exile and the contrapuntal, realism and postcolonial modernism, world literature, Islamophobia, and capitalism and the political economy of empire. It is an excellent resource for students, graduates and instructors studying postcolonial literary theory and the works of Said.

'Edward Said (1953–2003) was one of the most powerful and influential thinkers of his era as well as a leading advocate of the Palestinian cause.'

'The ideas within this book will find traction with students, graduates, and senior researchers in postcolonial studies, Victorian and modernist studies, cosmopolitan and refugee studies, as well as with political theorists. This absorbing collection of essays engages with Said's core concepts and outlines his achievements. … The admirable strides in After Said to aright or modify some of Said’s claims, to my mind, empower future scholars of empire to take Marxism more seriously.'

'After Said opens innumerate directions for future research and development. As such, it succeeds in its goal of showing, in astounding detail, nuance and scope, the many possible directions of postcolonial studies after Said.'

‘This volume, then, extends beyond the specific legacy of Said and addresses postcolonial theory more generally. Provocations feature across the series, which is intended to appeal to the non-specialist but also frequently contains interpretations and applications of interest to the practising cultural critic. The standard is high and the topics are diverse.'

‘Each chapter is distinctive either for being informative on some of the elements of Said’s life, research and political career, or for trying to push forward the debate on some of the problems Said emphasized, or missed, to develop in a more balanced theoretical advance towards new directions.’

‘… After Said is an important and timely intervention into postcolonial studies and academic convention. As such, it is well worth reading.’