Home
The African Heritage of Latinx and Caribbean Literature

The African Heritage of Latinx and Caribbean Literature 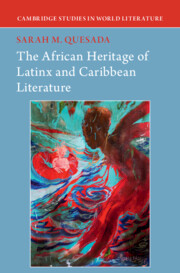 The African Heritage of Latinx and Caribbean Literature unearths a buried African archive within widely-read Latinx writers of the last fifty years. It challenges dominant narratives in World Literature and transatlantic studies that ignore Africa's impact in broader Latin American culture. Sarah Quesada argues that these canonical works evoke textual memorials of African memory. She shows how the African Atlantic haunts modern Latinx and Caribbean writing, and examines the disavowal or distortion of the African subject in the constructions of national, racial, sexual, and spiritual Latinx identity. Quesada shows how themes such as the 19th century 'scramble for Africa,' the decolonizing wars, Black internationalism, and the neoliberal turn are embedded in key narratives. Drawing from multilingual archives about West and Central Africa, she examines how the legacies of colonial French, Iberian, British and U.S. Imperialisms have impacted on the relationships between African and Latinx identities. This is the first book-length project to address the African colonial and imperial inheritance of Latinx literature.

‘By rehabilitating and privileging the African archive in her account of Latinx/Caribbean relations, Sarah Quesada’s book provides a fresh and very welcome instalment to debates about Pan-Africanism. But here, Pan-Africanism is more than just an aspirational political project, long distracted by the cynical pragmatism of political leaders. Rather, it is a work of re-animation that will redefine African and African diasporic relations through a well-grounded and nuanced humanities perspective. This book is a magnificent gift offering.’

‘Beautifully written, well researched and bold in its formulations, The African Heritage of Latinx and Caribbean Literature is an important intervention in the reading of Latinx and Latin American literature, widely defined. The brilliance of the book is manifest in the analysis, in which the Sarah Quesada unearths discreet connections to Africa and unfolds them into an ambitious and successful re-cartography of the Atlantic through a Latin America-Africa axis that is very persuasive and unique.’

‘Sarah Quesada has written a BIG book, both in its scholarly import and geographic scope. Quesada finally centers Africa in study of the Black Atlantic. She also redresses its exclusion of Latin America - a region that received three-quarters of enslaved Africans during the colonial period - while making plain why Latinx literature has always been a world literature. Reading comparatively and with laser focus across four languages, dozens of colonial archives, and three continents, Quesada traces the textual memory and political internationalism that has thrived for over eighty years among authors and political actors from the US Southwest, the Dominican Republic, Haiti, Cuba, Colombia, and Benin, Nigeria, Senegal, and the Democratic Republic of Congo. Quesada presents the reader with the beating nexus of cultural, political, and aesthetic Latin-Africa, in vivid and engaging prose, such as only a generational thinker can accomplish. Afrolatinidad is redefined in her capable hands.’

‘Quesada’s The African Heritage of Latinx and Caribbean Literature transforms Paul Gilroy’s notion of The Black Atlantic into an Afro-Latino Atlantic…Quesada is able to make a hopeful argument for the possibility of fiction - whether traditional print novels or heritage site oral storytelling - to helpfully respond to and potentially transform the path wrought by this real and symbolic violence.’