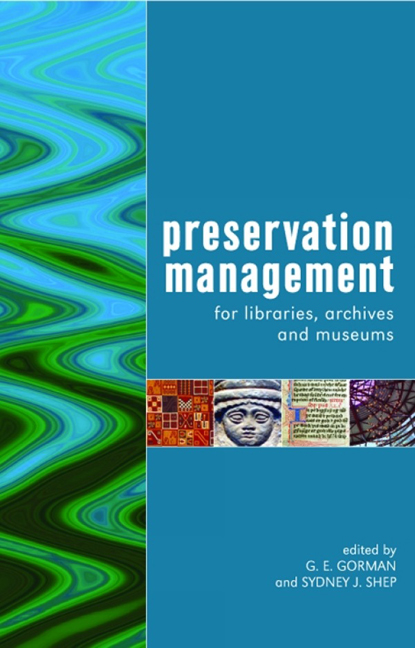 Preservation Management for Libraries, Archives and Museums
Buy print or eBook[Opens in a new window]

5 - Moving with the times in search of permanence

Reformatting of library and archive materials is an established strategy to support access to and the preservation of collections. Its role in collection management follows, on the one hand, from the tasks and mission of the institution – the needs of its user communities, its role in the preservation of heritage – and, on the other, from the characteristics of the materials themselves, which may range from medieval parchment to videotapes, from a peace treaty carrying the original signatures of political leaders to recordings of animal sounds made for research purposes. In addition, there are other determining factors, such as available resources and priorities perceived by the public and politicians. The digital revolution has contributed to the spectrum of possibilities and has brought about a fundamental change in the relationship between reformatting, preservation and access.

The choice is not so hard in cases where preservation can be left out of the equation altogether. Reformatting for access nowadays inevitably means digitization, for its obvious advantages for distant access, possibilities for searching, re-use, copying, etc. This is not to say that digitization for access is without its problems. The technology is new and it still suffers from limitations – sometimes even at a basic level, with regard to presentation, speed, and quality – while aspects like rights, persistent identifiers, integrity and authenticity are far from being resolved. Anyone who has ever tried to view moving image files over the web, for instance, has experienced poor quality and the quirks of media players. However, most of these issues are not exclusive to the library and archive field, and as there are commercial interests at stake here, it is likely that improvements will be forthcoming from which the public sector can profit as well.

The choices are much less straightforward in the exclusive domain of the heritage sector, that is the management of collections for access and preservation for the long term. Whereas the potential of digitization to open up collections on an unprecedented scale is beyond dispute, its role as a reformatting option for preservation is controversial, in view of the many uncertainties associated with the long-term maintenance of digital materials.