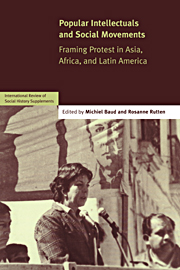 Framing, Transnational Diffusion, and African-American Intellectuals in the Land of Gandhi

Summary: Most of the contentious-politics scholars who pioneered the study of framing in social movements now also recognize the importance of transnational diffusion between protest groups. Interestingly, though, they have not yet specified how these two processes intersect. This article, in contrast, explores the framing transnational diffusion nexus by highlighting three historical moments of interaction between African-American intellectuals and Gandhian activists before Martin Luther King, Jr traveled to India in 1959. After briefly reviewing the relevant literature, it illustrates how three different types of “itinerant” African- American intellectuals – mentors like Howard Thurman, advisors like Bayard Rustin, and peers like James Lawson – framed the Gandhian repertoire of nonviolent direct action in ways that made it applicable during the American civil rights movement. The final section considers possible implications for social movement theory and fertile areas for further research.

In February 1959, a few years after the Montgomery bus boycott had anointed him as a prophet of nonviolence, Martin Luther King, Jr arrived in India to talk with fellow disciples of Gandhi and witness the effects of the Indian independence movement. He and his wife, Coretta, toured the country, had dinner with Prime Minister Jawaharlal Nehru, visited Gandhi's ashrama (self-sufficient communes), participated in conferences, and attended numerous receptions in their honor. During their four-week stay in India, the Kings discussed Gandhian nonviolent action with native experts like Dr Radhakrishnan, India's Vice-President; Jayaprakash Narain, a contemporary protest leader; and G. Ramachandran and R.R. Diwakar of the Gandhi Smarak Nidhi (Gandhi Memorial Trust).