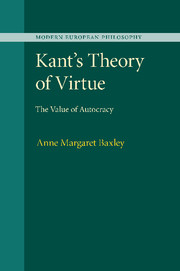 Conclusion: Kant's considered account of moral character and the good will reconsidered

Over the course of this book, we have seen that the moral psychology central to Kant's theory of virtue marks a significant development in his ethical theory. In his foundational works concerning practical reason, the Groundwork of the Metaphysics of Morals and the Critique of Practical Reason, Kant tends to characterize sensible feelings and inclinations as potential obstacles to moral action, at one point depicting inclination as “a natural and unconquerable aversion” to duty (Gr 4: 399; 55). From the perspective of the works in which he sets out the foundations of his moral theory grounded in pure practical reason alone, the prospect that Kant could assign a well-developed sensible nature a constructive role in virtue appears doubtful. Indeed, in these works, it looks as if all that is strictly required for Kantian moral character is rational self-constraint in conformity with the moral law, or doing one's duty from duty in the face of opposition from inclination. Yet, in his later and less familiar ethical works, including The Metaphysic of Morals, Religion within the Boundaries of Mere Reason, and the lectures on ethics, Kant recognizes certain aesthetic dispositions that are natural to us as crucial for moral character, and he identifies feelings, desires, and interests that are shaped by reason as important in a virtuous life. On the full Kantian account of virtue that we have uncovered from these texts, it is evident that Kant does not reduce virtue to mere continence, as a number of his critics have claimed.