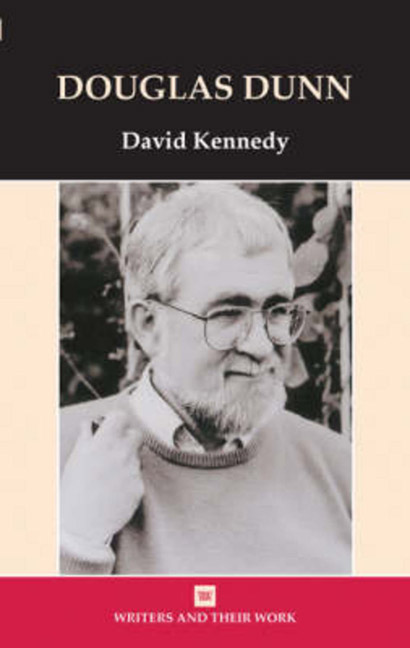 Douglas Dunn
Buy print or eBook[Opens in a new window]

David Kennedy
Affiliation:
Dr David Kennedy is a poet critic editor and teacher and an independent scholar specialising in contemporary poetry in English.

When Douglas Dunn's first collection Terry Street appeared in 1969 it seemed clearly identifiable with what Jonathan Raban, writing two years later in The Society of the Poem, would term centralism. Centralism, Raban argued, used ‘a common, simple voice’ to ‘construct a notional ‘actuality’ which paralleled the English reader's everyday ‘sociological and political environment’. Poets like John Fuller, Ian Hamilton and Hugo Williams explored ‘shared forms of experience – marriage, loneliness, the fear of death, the routine of work’ and let into them ‘slippery trickles of insight and menace’. Many of Terry Street 's poems do function in this way. The beginning of Dunn's poetry career also seemed to ally him closely with centralism. Over half of Terry Street 's poems had originally been published in magazines such as New Statesman, the Review and The Listener; and eleven of them had appeared in the first Faber Poetry Introduction. More to the point, Dunn's use of unusual and precise negative adjectives like ‘unlovely’ and ‘unrotting’ (TS, 13, 42) was a clear echo of centralism's dominant voice, Philip Larkin, whose own poetry was similarly characterized by words like ‘unfingermarked’, ‘unrecommended’ and ‘unspent’. The use of such negatives sends complex signals about both centralism and realism. To call something ‘unlovely’ instead of ‘ugly’ is not only to be absolutely clear about its attributes but also to describe the conspicuous lack of a quality that ought to be present. There is perhaps something peculiarly English in the way such usages say something horribly final in what looks like the language of understatement. Such usages may also be distant echoes of the progressively disenchanted pragmatism that dominated English cultural and political life in the late 1960s.

Over thirty-five years later it is, in Sean O'Brien's words, ‘hard to view Terry Street as simply ‘‘realistic’’ ‘ (RDD, 68) or, indeed, to identify it so readily with post-war English poetic centralism. Much of this has to do with Dunn's responsible portrayal of his own ambivalence. He shares a common ground of class with Terry Street's inhabitants but is set apart by his cultural origins and his education. He admires aspects of their lives – uncomplicated masculinity in ‘Men of Terry Street’ – but is repulsed by their acceptance of materialism and what the book's first poem calls ‘the litter of pop rhetoric’ (TS, 13).