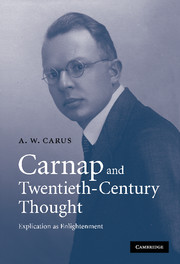 3 - The grand plan of a ‘system of knowledge’: science and logic

In a letter written to a friend from the western front, in 1916, Carnap already expresses his impatience at the barriers between science and philosophy. Asked to recommend readings on the foundations of science, he admits that ‘what the physicists have written about the foundations of physics will hardly satisfy a philosopher … Even a mind as sound as Mach's frequently makes me shake my head’ (ASP /WF 1916c). He concedes that a ‘non-specialist’ like Natorp or Wundt might actually be preferable, though he hasn't read them yet. Poincaré and Helmholtz are singled out for favourable mention.

By 1920 he had read a good deal more, but remained unhappy with the gap between philosophy and science. The sciences that proceed mathematically have developed very rapidly in recent years, he says, ‘without devoting much time to the critical appraisal of the foundations and methods of this construction’. Both sides are to blame:

Part of the blame rests with philosophy, which has often failed to comprehend the viewpoints of those rapidly developing sciences; on the other hand, part of the blame goes to the sciences, which were occupied more with conquering new territories than with securing and carefully integrating what had been gained. In short, through the fault of both sides a mutual alienation developed.

On reflection, though, he continues, the fault is really on neither side, but inherent in the situation.

What happened was unavoidable given the rapidity of an advance in mobile warfare: communications broke down between front and staff. To the philosophers at headquarters, in the absence of bulletins [from the front], the situation became less and less clear; it is especially unfortunate that although Kant was still alive at the time of the first work on the fundamentally important non-Euclidean geometries, he received no bulletins about them – which [if he had received them] might have been of great benefit both to his system and to those geometries. At the front, the lack of communication could have been even more damaging if there hadn't fortuitously been a few leaders who made up for their lack of strategic schooling with native insight and clearsightedness: thanks to men like Gauss and Helmholtz as well as Riemann and Hertz, among many others, who combined outstanding talent in their specialties with great system-building power and a sureness of instinct for the big picture, by and large the right paths were followed.