from Part II - Public Reason in International Courts and Tribunals 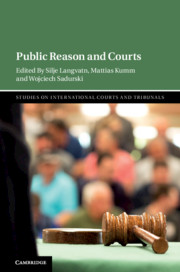