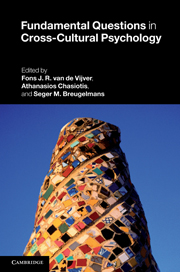 from Part I - Similarities and differences in behavior across cultures