from Part IV - Beyond the ICC

from Part III - Practices of inclusion and exclusion 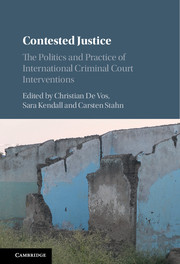