from Part II - Predicative Mathematics and Beyond

from Part II - Predicative Mathematics and Beyond

from Part I - Invited Papers

from Part Five - Oracles, Infinitary Computation, and the Physics of the Mind

from Part I - The Main Positions 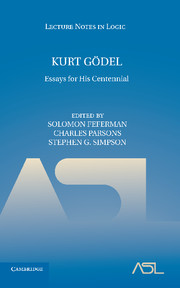