from Chapter 3 - Medicolegal Investigation of Elder Maltreatment and Deaths 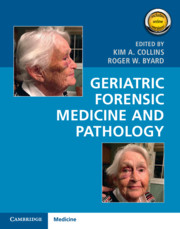