from Part I - The building blocks of the soil

from Part II - Soil genesis: from parent material to soil 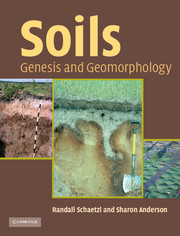