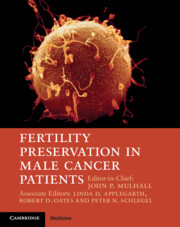 from Section 4 - Fertility preservation strategies in the male