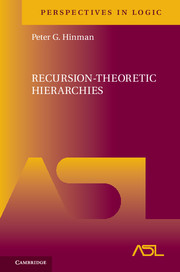 from Part B - The Analytical and Projective Hierarchies

from Part B - The Analytical and Projective Hierarchies