from Part II - Courts and Records of Litigation

from 2 - Errores in Camera Scaccarii

from 2 - Errores in Camera Scaccarii 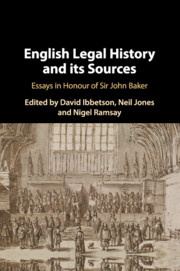