from Part IV - New Narratives in the Middle Byzantine Period 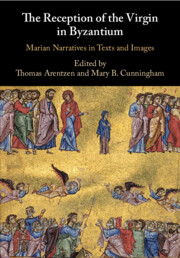 from Part I - Doctrine and Tradition